You can interact with these cards via gesture, such as flipping horizontally to switch to a new card or up and down to drill down within a card or back out. There’s also a top-mounted touchpad that can be used for volume controls. When the context demands it, this converts to an colored LED display that acts as a night light and reveals four touch buttons.

The back of the model incorporates dual USB ports for charging your phone or other devices, and there’s a power button and jack. Most of the models also include a 4400mAh battery with 8 hours of music streaming and 20 hours of passive use, and one model has a Qi wireless charging pad.
There’s no mention of Linux, but in the comments, Onion says the Oboo runs on the same OS as the Omega2, which is Linux.

The device includes Alexa and IFTTT support, so your alarms can trigger devices on an Alexa connected home automation network.

Four models are available on Kickstarter:

The extra $158 for the Maker Edition seems like a bit much for SDK access even if you do get an extra power supply and early access, however it’s an impressive showcase for the capabilities of the low-powered, MIPS-based Omega2 module. 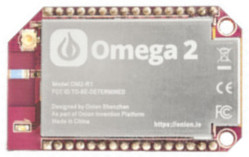 The Omega2 inside the Oboo Smart Clock runs Linux on the same 580MHz, MIPS-based Mediatek MT7688 system-on-chip found on the original Omega. The MT7688 is notable for offering a built in WiFi radio.