Perhaps because of resources crisis that we live, finally, a growing awareness about the materials is rising.

In my opinion, there are three kinds of considerations we can do when talking about fair trade and, in general, when we talk of components built or including what we usually call “rare earths”.

The first consideration is related to the conflicts that often take place in areas from which these materials are extracted: this issue has been known for a long time already and we’re doing something already.

Few days ago, while interviewing Limor Fried (you can read the interview here), she told us: 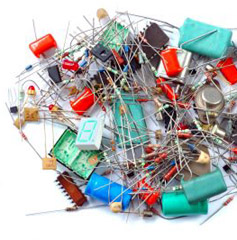 “It’s already happening (fairer electronics), while I can’t speak for other companies, at Adafruit we are trying. It’s certainly true that right now most electronics contain metals that could come from a conflict-area. Unfortunately there is no way to know whether the components you are purchasing contain conflict-metals. For that reason, we try to avoid using tantalum capacitors and use ceramics when possible instead. It would be great if components were rated not only for RoHS-compliance but also conflict-avoidance.”

This gives a glimpse of how, *fairness* certifications – a bit like the ones we have already become accustomed to see on coffee, spices, or on many other products – may soon b featured for resistors, capacitors and allow companies to create supply chains in a more conscientious manner.

And if we think that conflicts could just be relegated to small and forgotten corners of Africa, and that we can close our eyes on them as we did for many other conflicts that have bloodied the African continent – for diamonds, oil and everything else – maybe this time we’re wrong.

China, a more and more global superpower in strong development phase, with increasing domestic needs, has a monopoly or certain, many of these “rare earths”. What will happen when we need those materials? What will be the conditions of the agreement? That’s why many are looking for new ways to identify new mining fields – even if underwater – like the Telegraph reported days ago.

Obviously, what individual companies can do remains little: Adafruit for example, is for now still a small company with limited production, and much of its value added is in education and community. It’s certainly more difficult to see this approach applied in large-scale manufacturing industries where thanks to large productions and an approach that is thirsty for profit, each penny counts.

Few positive sign, however, it also sees in this sense.

Days ago, a post on the Silicon Valley Watcher talked about HP moving towards electronic supplies that are more fair. In particular the article and HP announcement were referring to another key aspect: fair work and respect for workers.

In fact, it’s not only those living in military conflict areas in Africa that suffer inhumane working conditions: it’s been often reported in Shenzhen FoxConn factories and everybody knows that China is not a champion in respecting working rights.

An interesting passage of the piece on SVW, shows how, in essence,

HP’s rules will be difficult to monitor or enforce. However, all journeys begin with a small step and the eventual outcome will be a type of “Fair Trade” standard for electronics products.

The eventual rise of unions and living standards in China and other countries will also help tackle the problem of young workers being exploited, and unsustainable working conditions in factories.

Any rise in labor costs due to better working conditions, would likely be minimal and partly offset by the continuing decline in prices for chips and other electronic components.

Showing how, in reality, an investment effort towards more *fairness* would be just a small drop in the ocean of profits that consumer electronics companies still manage to take home.

Apple itself has been recently reported evaluating an attempt to force its suppliers to meet higher safety standards.

The Cupertino giant is considering the idea to bring home some parts of the manufacturing process of its products. This option would certainly mean a lot and would discourage price competition to the detriment of the labor rights. On the other hand, Chinese unions show better results every day, in recent years, and in tandem with the economic growth – wages are rising in the East, making it less interesting – the practices of extreme reduction of product costs through offshoring make less sense each day.

Reset production and sourcing of resources on a local basis – moving it again closer to design and consumption – is a very hopeful idea that is finally gaining a bit of visibility and that brings us to another major theme of the Fair Trade Electronics. Well, the impact on the environment.

Sustainability is another central point indeed, not only the resources and materials “themselves” can be scarce and under depletion, but the processes used to access, extract and market them can have a huge carbon footprint.

See this nice video I saw months ago, in May 2012: it’s by my friend Morgan, founder of http://fairtradeelectronic.org/


Very agreeable. But luckily the coming months made ​​me realize that something is moving:

With an even greater ambition in fact, a few months ago, following a spectacular ted talk:

A team of dreamers created the Fair Phone project with the aim of creating a Phone that is fair in all its building process. The team actually documented the whole process on this beautiful blog that I suggest you follow http://www.fairphone.com/blog/ and is now preparing to enter the final stages of production, which will end up with few thousand pieces (halfway between industrial production and a DIY for now).

To prove that, already today, a Fair Phone is possible, could be a major step forward.