Don't miss
Home   >   Opinions   >   Is Open Source Hardware for People or for Businesses?

Is Open Source Hardware for People or for Businesses?

As some of you may already know, this year I will be co-chairing Addie in organizing the Open Source Hardware Summit (here’s last year event website). Aside from the obvious excitement for the opportunity, since a few days, in addition to the more stringent organizational aspects – which is to finalize a location and date, be cool we are getting there – I began to think about the program.

In my mind, this Open Source Hardware summit, would be a summit in which – among other things – we promote the meetup of companies with projects and communities, as today the companies themselves have a crucial opportunity to generate an impact.

Doing this reflection, however, I wondered if the open source hardware must be something that points more to the people, and their fundamental freedoms – as to have access to knowledge and to share it – or more to companies as a means of growth and increased efficiency. I myself have written, no more than a few days ago, that open source hardware may be used as a tool to conquer new markets if plugged into an appropriate business strategy. 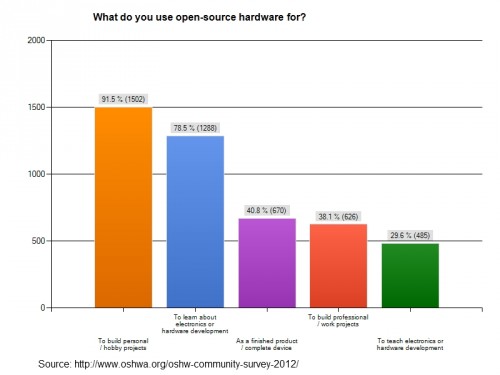 This reasoning brought me back to the history of Free Software. Richard Stallman proposed in the eighties a position that was substantially fundamentalist; he always tried to create awareness behind the vision of Free Software: it is about us, our personal freedom as users and creators. From the beginning, it was created around the Free Software movement, even a foundation, which proclaimed these ideals.

However, the real take-off in the penetration of open source (and in most cases, even Free) software has had during the 2000s, when the substantial campaign led by Tim O’Reilly has found appreciation also thanks to a huge communication effort, think of the role of O’Reilly media, to know how to stimulate and intrigue the world of business. Before the startups, then the big companies (many become such), all have embraced the open source software that is now a mainstay of the web.

I we look at it, however, today we are experiencing a similar situation: many startups are entering the hardware business with an open source approach but without a great awareness on the implications of personal freedoms. The debate on things such as the right to repair, or combating planned obsolescence, and gaining access to the knowledge is in fact still very marginal. 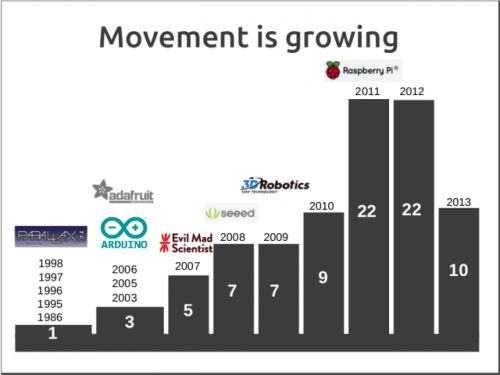 Instead, it appears clearly that, at least in some emerging markets (already mentioned here eg: drones or 3d printers) open source is being configured as a great common denominator of a transition from mass-market to a micro niches one, based on cultural expression of independent creators (also thanks to the incredible role that crowdfunding is having).

New models to support this transaction emerge every day: just a few days ago, while I was in Brussels for the OuiShare summit, I had the good fortune to chat with Sylvain Le Bon, founder of the OpenInitiativeproject and OpenFunding, a very effective idea: to fund open source software (and why not, open source hardware) feature by feature, again increasing the ability of the community to address and support creators.

But the question that arises, therefore, regardless of who is the final target of the movement, is this: who will create the common basis on which to innovate in a open way? In the biggest success stories to date it was still linked to a university: it was Cambridge for Raspberry PI (ed: I must admit RaspberryPI is not really OSHW to be true and it’s not the perfect example here), Bath for RepRap… Arduino itself was born in an institution of higher education, even if private, the Interaction Design Institute in Ivrea. Not to mention the work that the CERN has done in the field.

I do not think, however, that in the long run, we shall believe that the leadership of this movement can emerge from research: what is needed is closing the circle with civil society and find new players to be the leaders of this transformation, of which we definitely need, from the industrial transformation point of view. But who will have this role?

I always thought that the open source hardware movement lacked a key component, the community. If we look at the movement today, there is indeed a plethora of companies active in the field, effectively described recently by making society, but projects that arise from or refer to large communities, are still few.

There are whole areas of the market where open source hardware has not yet had the chance to have his say, but where the potential is there to express amazing projects. The communities connected to these areas, could therefore support those actors, being them commercial or not, who are able to be the spark that starts the whole thing: think about what they are doing at Wikispeed OSVehicle with the automotive industry. This is precisely the role that these communities must have: ask, drie and sustain shared innovations.

These communities can take charge of the effort to support economically wise and strategically wise,   projects related to vertical industries: automotive, marine, appliances, and so forth. Some areas have already expressed their flagship projects: it is already happening with the architecture and design, think Wikihouse and the role that the community has been behind the projects in question, a role very well told by Alastair few months ago right here.

On the other hand, many today advocate to reinterpret the business in a new key: in a perspective that goes exactly in this direction. Only a few days ago, an incredible post by Lee Bryant on post shift:

The core of his thesis is that there are three broad types of innovation (ndr: Empowering innovation,  Sustaining innovation, Efficiency innovation)  and they combine to form a cycle of invention, improvement and optimisation that produces free capital to begin the cycle of innovation once again; but what we are seeing today is that cycle is broken and cash is being hoarded at the expense of value-creation.

That, quoting the famous Clayton Christensen referred to the dynamic that we seen in the last few years: innovation focus in efficienting systems so that to drain capital from industry and shift them to the world of finance where speculation often offers much more than others approaches, especially with the sluggish economy in which we live.

So, in a way, we need to bring us back to seek “empowering innovation” that expands access to technological innovations in waves, to new segments of society. My argument at this point is exactly this: open source hardware (open source in general) or more properly an innovation that is actually based on the commons, can have this role today. The commons are the opportunity to extend access to innovations without the need for capital, now more interested in financial speculation that in impact on the transformation of society.

It seems clear, therefore, who’s the final target to be engaged in this revolution, in the absence of interest from financial investors: we are looking for communities, even if we didn’t realize it yet.

We are trying to tell you that thanks to these new tools there’s now a way to take responsibility – as a community – to support innovation by directing the rudder to impact and growth of a long-term ecosystem rather than thinking about quarterly earnings.

Let’s see if we can cope with the challenge in front of us.