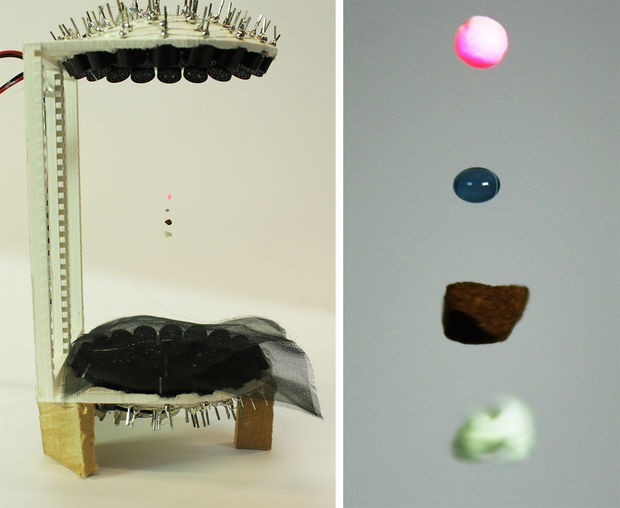 Asier Marzo, Adrian Barnes, and Bruce W. Drinkwater have developed a 3D-printed, Arduino Nano-controlled acoustic levitator. Thanks to this device you can levitate tiny drops of liquid, small solids, or insects in mid-air.

Acoustic levitation has been explored in hundreds of studies for applications in pharmaceuticals, biology or biomaterials. It holds the promise of supporting innovative and ground-breaking processes. However, historically levitators have been restricted to a small number of research labs because they needed to be custom-made, carefully tuned and required high-voltage. Now, not only scientists but also students can build their own levitator at home or school to experiment and try new applications of acoustic levitation.

The principle is similar to the vibration you feel when next to a large speaker, but in this case, the homemade levitator employs ultrasonic waves to push particles without causing any damage to humans.

Their device uses two arrays of 36 sonic transducers in a concave pattern, which face each other in order to suspend objects like Styrofoam, water, coffee and paper in between. Several items can even be trapped at the same time, and liquid is inserted into the “levitation zone” via a syringe.

For further information jump on the related instructables page.