Dadamachines: the Open Source Solution for Your Creative Orchestra 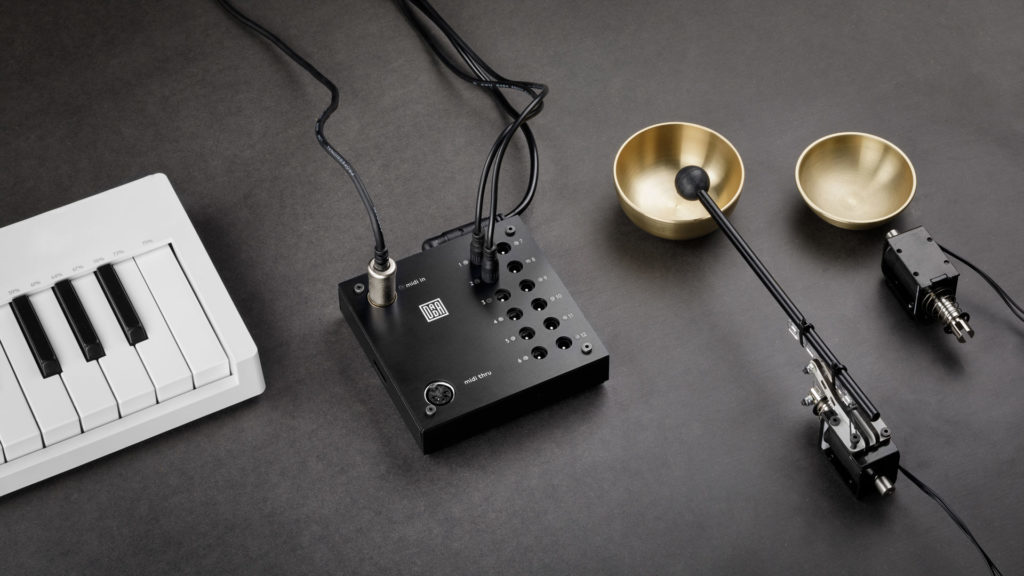 If you think of a hardware controller as a way of turning physical input into digital music, this really is a glimpse of what happens when you make digital music into physical output.

The cleverest thing Johannes has done is to nicely productize the core of the system: Dadamachines.
The automat controller box, the brains of the operation, lets you quickly plug in anything12 volt.
That’s nice, in that there hasn’t been any plug-and-play solution for that. So whether it’s a solenoid (those things plunking stuff) or a motor or anything else that runs on 12 volt, connections are easy.

There’s a USB connection for a computer/tablet, but you can also unplug the computer and just use MIDI in and out. And it comes in a nice case!

The different variations (explained on Kickstarter) allow you to do real-world percussion with objects of different sizes, shapes, and orientations. Some produce sound by bouncing materials off a speaker; some sit atop objects and hit them. One is a mallet; a LEGO adapter makes prototyping really easy.
You’ve now left the digital domain and are in the acoustic world — so the creativity really comes from what real-world materials you use and the musical patterns you devise.

But for people who do go deeper, this is open source hardware. Everything is Arduino-based and looks easy to hack. The GitHub site isn’t live until after the campaign , but this looks really promising. And it’s still a lot easier than trying to do this yourself with Arduino – even just solving the case is a big boon.