Control Your Streaming Computer with a TV IR Remote Controller 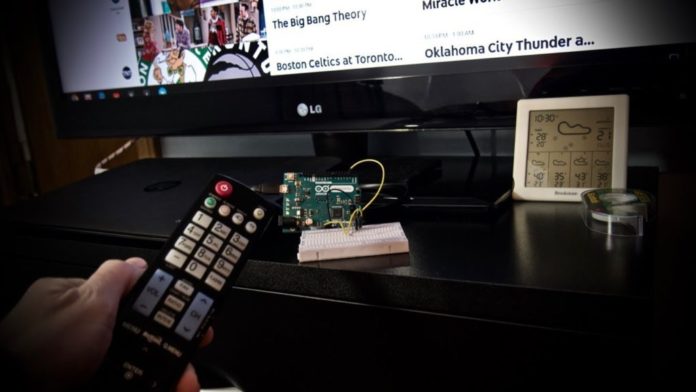 If you want to use an actual computer for video streaming, you’re normally left using a keyboard and mouse for navigation.

YouTube hacker Kevin Darrah decided to make a gadget to let him surf streaming channels with the actual remote that came with his TV, based on the ATmega32U4 microcontroller. Unlike the Arduino Uno’s ATmega328P, the ’32U4 found on the Arduino Leonardo, Pro Micro, and various other board can act as a native USB HID device, emulating a keyboard and mouse.

His simple solution reads IR signals with an IR detector module, which can then be passed along and translated into USB keypresses for computer control.

“Fun project here that could have a lot of uses – basically a TV remote to USB translator, so could think of a lot of ways to use something like this.  For me, I just wanted an easy way to channel surf using the same TV remote that came with the TV.  For this, I just read in the IR codes form the remote, then map them to key-strokes to do different things.  I could see the up/down left/right keys being used to drive the mouse around… lol, that might be my next project!”

All the information you need are available here.