If you are a watcher of the world of drones, or multirotors, you may have a fixed idea of what one of these aircraft looks like in your mind.
You are almost certainly picturing a four-rotor design, such as the extremely popular DJI Phantom series of craft. Of course, four-rotor designs are just one of many possible configurations of a multirotor.

A simple three-rotor design will therefore naturally spin in flight, and be next-to-useless as an aircraft without some means of counteracting that rotation. In the simplest of flyable trirotor designs one of the rotors is simply mounted at an angle to vector some of the force sideways in an analogous manner to the tail rotor on a small helicopter. This has the desired effect of creating a flyable machine but offers no advantages, and a few disadvantages, over a four-rotor design.

Where three-rotor craft come into their own though is when instead of being mounted at a fixed angle, one propeller is mounted at a variable angle. When the force counteracting the rotation is under variable control, this ability for the rear propeller to yaw gives the craft some of the characteristics a fixed wing aircraft gains from its tailplane. The result is that tri-rotor craft can deliver a more stable and more agile flight than their multi-rotor cousins, at the expense of an extra servo with its control circuitry and software.

The additional benefits of the layout are that with fewer drive motors it can be more energy-efficient, and with a larger gap between rotors it can have larger propellers and provide a more unobstructed view for a camera.

If you fancy owning one then you can click here to find all you need to build one yourself. 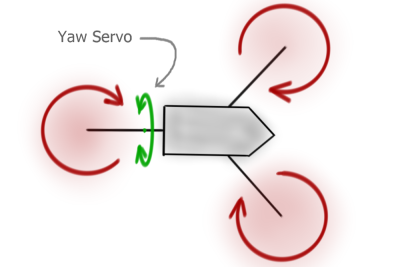