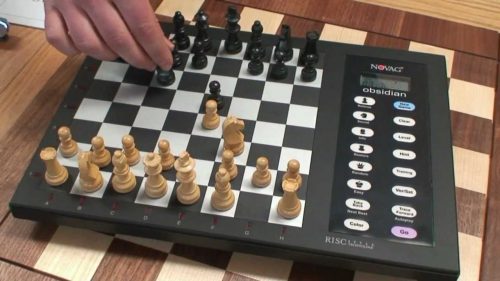 I have a chess computer (not pictured), it’s quite a good way to play longer games at home. It’s hard to find an opponent online to play a game that might last 4 hours, and even if you find one, it’s easy for one side or the other to get distracted or lose interest. A chess computer is a good way to sit down at a real board and play a long game of chess without distractions.

Typically you input your moves by pressing down on the piece you want to move, then moving it, and then pressing down on the square you moved it to. There is a membrane switch underneath each square, which is what you’re actuating by pressing the piece down. Once you’ve made a move, the computer thinks for a while and eventually beeps to alert you that it’s decided on a move. The LCD display then tells you what it wants to move in a basic algebraic notation, e.g. mine says “E7E5” if it wants to move the piece from e7 to e5. You are then responsible for moving the computer’s piece, the same way you moved your own: press down on the square you’re moving it from, then press down on the square you’re moving it to.