Don't miss
Home   >   News   >   From the Arduino Tunderstorm – Arduino Zero Pro: a new board from the “Arduino.org” company

From the Arduino Tunderstorm – Arduino Zero Pro: a new board from the “Arduino.org” company 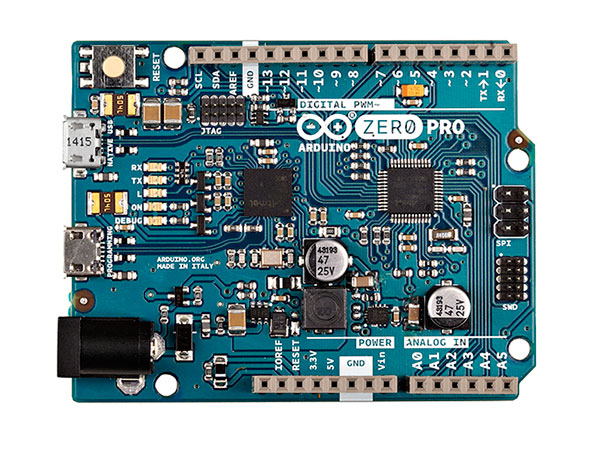 Right in the middle of the legal thunderstorm that is affecting our beloved original Arduino, the “other one” the S.r.L. company, aka Smart Projects, now managing the arduino.org website just released two important announcements few hours ago.

The first one is the release of Arduino IDE 1.7.0, that you can download on the Arduino.org download page.

The second one is the new Arduino Zero Pro board:

“With the new Arduino Zero Pro board, the more creative individual will have the potential to create one’s most imaginative and new ideas for IoT devices, wearable technologies, high tech automation, wild robotics and other not yet thinkable adventures in the world of makers.
The Arduino Zero Pro represents a simple, yet powerful, 32-bit extension of the Arduino UNO platform. The board is powered by Atmel’s SAMD21 MCU, featuring a 32-bit ARM Cortex® M0 core.
With the addition of the Zero board, the Arduino family becomes larger with a new member providing increased performance.
The power of its Atmel’s core gives this board an upgraded flexibility and boosts the scope of projects one can think of and make; moreover, it makes the Zero Pro the ideal educational tool for learning about 32-bit application development.
Atmel’s Embedded Debugger (EDBG), integrated in the board, provides a full debug interface with no need for additional hardware, making debugging much easier. EDBG additionally supports a virtual COM port for device programming and traditional Arduino boot loader functionality uses.”

If you’re interested in some details about the dispute and its impact on the release, read this nice post on Hackaday