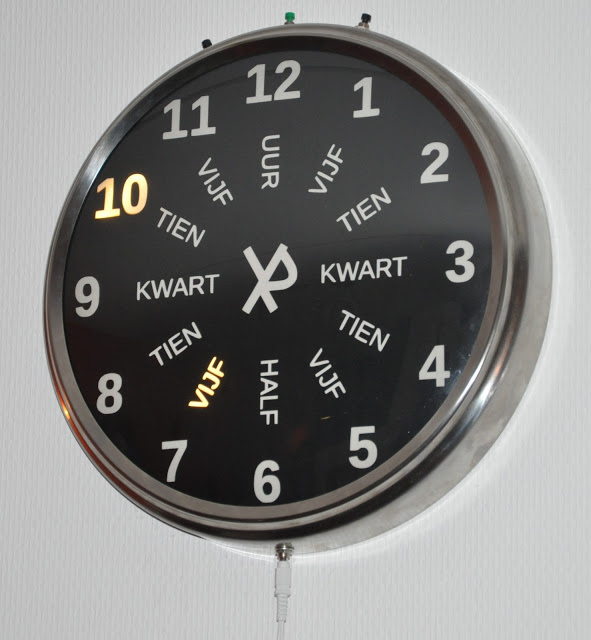 Interesting project to take inspiration by, a word clock featuring Arduino to control the “minute words”!

As I was making a word clock, based on another instructable ( http://www.instructables.com/id/My-Arduino-WordClock/ ), me and my sister were wondering whether a round design would be cool too. While searching the internet, I could not find a round word clock, so we decided to design/create one ourselves.
The clock displays the time somewhat similar as on a regular word clock. There are two major differences, on a ‘regular’ word clock the hours are words. On our word clock they’re numbers just like a normal clock. The minutes (in 5 minute steps) are replaced by a word on the clock and the location of the word provides extra information.
Note that I use Dutch templates, but an English version should work too. Of course some changes to the software are required.
Here’s the list of materials used for this clock:

So, how can you read the time? (a rather important aspect of a clock)
On the clock at any given time only one number and one word are illuminated. As you already guessed correctly, the numbers represent the hours and the words represent the minutes.
Let’s say it’s five o’clock, the 5 and the ‘UUR’ (hour) are illuminated. Ten past five, the 5 and the ‘TIEN’ (ten) in the upper right quadrant is illuminated. Note there are more ‘TIEN’s on this clock. The location of the word also has a meaning. Perhaps another example makes this a bit more clear. In Dutch we say when it’s 05:50 that it’s ‘tien voor 6’ (TEN to 6). So, at 05:50 the number 6 is illuminated and the ‘TIEN’ in the top left quadrant.

Clock language is “set” to Dutch, to understand it and how to modify it to have an English version, follow the original website link: My electronics and stuff: A round word clock (sort of)

Here is a video showing off the clock during its normal operations: