An Interview with Alessandro Ranellucci father of Slic3r 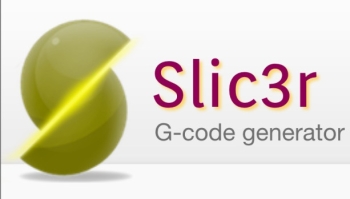 Continuing our experience in interviewing cool people from the Open Source hardware, digital manufacturing and startups realm we are now presenting today an interivew with Alessandro ranellucci

Alessandro, lives in Rome (Italy), has a background in architecture and in software development, that he himself describes as “two parallel worlds” despite enjoying spending time in both fields. Alessandro has been playing with 3D printing for two years, and, in the meanwhile, the became the author of Slic3r, the most popular software for converting digital 3D files into machining instructions that is used from most of the open, independent and DIY 3D printers in the world.

[Open Electronics] Alessandro, how did you start working on with 3d printers? You’re an architect and a software developer, a pretty mixed background! Was Slic3r your first adventure in this world?

[Alessandro Ranellucci] I needed a cheap way to make architectural models and after some googling I found the RepRap project, a global and community-driven effort to build an open self-replicating 3D printer. It was both the solution to my own problem and the start of many opportunities. I joined the project and since I was not satisfied with the state-of-the-art I decided to start rewriting the software. I had been developing open source software for ten years.

[Open Electronics] What do you expect from the realm of 3d printing? We know you recently built a mini 3d printer: what new types of 3d printers do you expect to see? It’s more a form factor evolution or a diversification in the synthering/extrusion technology?

[Alessandro Ranellucci] Community efforts have been focusing on the Fused Filament Fabrication technology because it produces strong parts, and this was a key point back in the days when the primary goal of the RepRap project was self-replication. Now we need open designs for other technologies too: resins, UV, lasers, powders, sheets, etc. There are independent groups already working on some of these, but no one is mature yet. Also, there are mixed feelings when it comes to start fully open projects. It looks like the media attention around 3D printing is pushing people to feel the strict and immediate economic value of their work, without thinking about the higher value produced by sharing such designs and adopting a fully open model. Openness is the only reason behind current 3D printers being so affordable and so good. We have low-cost 3D printers and low-cost filament because we have open 3D printers.

[Open Electronics] We also know you and your team at the makerspace are working on a vertical plotter, these items are increasingly interesting to developers worldwide, do you think there’s real room for such an object? Will this technology eventually converge with room sized 3d printers?

[Alessandro Ranellucci] I think there’s room for any kind of machine that converts a digital idea to its physical representation, and viceversa. Antonio Ianiero’s vertical plotter moves all over a wall like a spider moving on an invisible web, and leaves traces. It’s not just a bot for making large drawings, it’s a machine for changing the surrounding world and altering how the spectators feel the space. There’s plenty of techniques and devices for making virtual worlds out of reality, but we are just at the beginning of a long series of machines to alter our physical world. 3D printing, and digital fabrication in general, is not only good for making objects – it’s got a huge potential for making spaces. For now we can control shape and color, but we’ll soon be able to control sound, taste, smell according to our digital idea. And by the way, we’re already seeing the first efforts towards room-sized 3D printers (KamerMaker in NL, as well as D-Shape and Wasp in Italy).

[Open Electronics] What’s the role of an efficient Software ecosystem in support of this digital fabrication revolution?

[Alessandro Ranellucci] Software provides the intelligence that machines need for crafting objects, so the result is strongly dependent on software. Also, software is a bottleneck for open hardware projects: lack of features can slow hardware development down, or even block it. Some months after the first release of Slic3r, Neil Underwood (core developer of RepRap project) announced the first print using 10 micron layers. Slic3r made that possible. Why? Just because it was faster than Skeinforge, and there was no more need for waiting several hours between one print and the next one. Slic3r acted as an enabler in several more fields. One example is multi-extruder printing. After I implemented support for such technology, people started experimenting with multi-extruder hardware and sharing the first designs for it.

[Open Electronics] What is the health state of this ecosystem? I mean, it seems that there are relevant lacks of fully functional open source softwares in many fields (such as 3D modeling). Is this being a brake on oshw development?

[Alessandro Ranellucci] 3D software requires a large amount of work, as computational geometry is much more complex than the usual web-related open source applications dealing with databases and so on. Testing is time-consuming, GUI programming is time-consuming. The intrinsic complexity of code leads to poor contributions from the community in terms of actual coding. But still, community plays a precious role in distributed testing, and that’s very useful for my work on Slic3r. I’m even surprised that we have some good open software for 3D modeling (Blender, OpenSCAD, FreeCAD) given the complexity of them. I think we should encourage crowdfunding for such projects, and others in this area.

[Open Electronics] Do you think that digfab could really have an impact on actual goods manufacturing? Or its just another bubble? What would be the impact of digital fabrication in daily householder life?

[Alessandro Ranellucci] I’m not sure about the actual manufacturing, but I really think digital fabrication will impact culturally: mass customization and source availability, for example. I think people will pay more attention to the openness of the industrial products they buy: will I be able to print a spare part for this device? will I be able to plug an USB cable and customize it with an API? will I be able to reflash it with a new firmware developed by some online community?

Also, digital fabrication opens so many new opportunities  about education, knowledge sharing, low-cost supplies for developing countries. The power and the value of such new fields are already enough that I don’t care much about how goods manufacturing is going to be replaced.

[Open Electronics] We are seeing lots of buzz on 3D printers but probably we need the same level of grassroot innovation also with other fabrication machines such as laser cutters or CnC machines. Isn’t it?

[Alessandro Ranellucci] Sure, and it always comes down to openness and community-driven development. There’s a lot of room: pick your project and start contributing!

[Open Electronics] What will be your next exciting project?

[Alessandro Ranellucci] My Slic3r roadmap is still quite long, and I want to extend my efforts towards other fields of digital fabrication. There’s a lot to do!