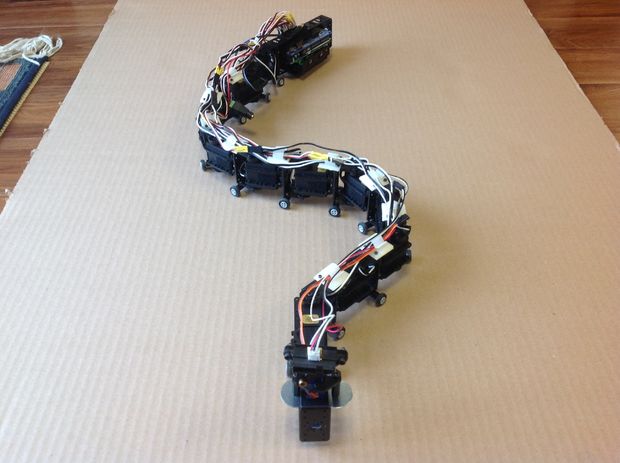 He put a dozen Arduino Mega-controlled servos together in a reptile configuration to allow the robot to move via serpentine motion (like a normal snake), rectilinear motion (like a worm), or sidewinding (which snakes use in shifting terrain). It can also twist itself into a wheel and roll in this rather unnatural, though quite interesting way.

A 5AA battery holder powers the Arduino into the tail section of the snake.
The servos are controlled by an Arduino Mega and powered by a 7.4 volt battery pack. A four button keyfob transmitter provides remote control for the snake.

The Lake Erie Mamba contains 12 segments, each consisting of a servo motor, a C-bracket, a side bracket, a wire clip, and a set of LEGO wheels.

The reconfigurable robot is not only controlled using a four-button key fob remote, but it can move autonomously. An IR distance sensor attached to a micro servo can be connected to the robot’s head to allow for autonomous movement.