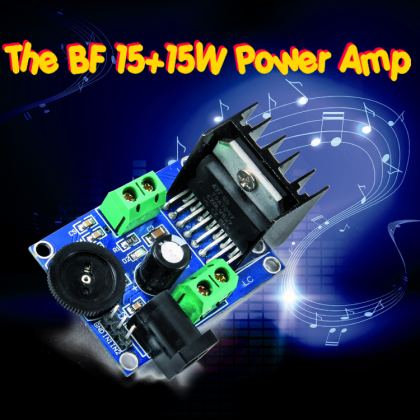 A compact stereo amplifier that may be used at home as well as in the car, and also to substitute broken audio power amplifiers or to create bench power amps for the analysis of audio devices.

When repairing audio devices, it is always useful to have a BF amplifier on your workbench; all the better if it is a stereo one, since with such an amplifier it is possible to test stereo devices such as Compact Disc readers, cassette decks, tuners, MP3 readers and so on. Therefore we designed a very compact amplifier for the lab (and not just that), a proposal for you so that you may create it. It is composed of very few elements that surround the monolithic integrated circuit by ST, that is capable of supplying an output power of 2×15 watt, that are effective on a 4 ohm load (speaker). A good output power and good sonic qualities (as regards the harmonic distortion and the bandwidth) allow to make the circuit a suitable one even for applications that have nothing to share with the lab: for example, it is possible to use it as a power amplifier for a pair of amplified speakers for the PC (the amplifier is placed into one of them, the other one is connected by means of a flat cable) or a self built stereo system. The amplifier may even be used for the substitution of the broken power amp of a compact hi-fi system for which it is no longer possible to find the spare parts, because of its very small size and good performances as regards the sonic quality. In fact it is an amplifier that without doubt may be placed among the high fidelity ones. But we will talk about the applications later, after an overview of the circuit diagram and after having analyzed its functioning and features. 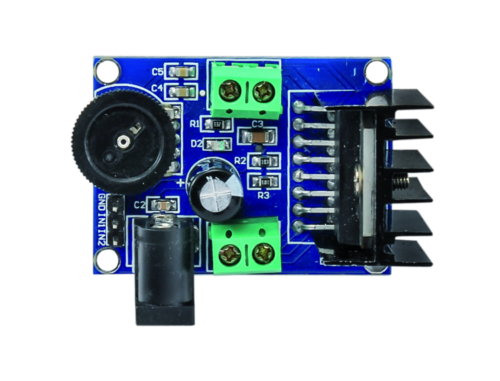 The amplifier revolves around a monolithic integrated circuit for universal use, that is composed of two BF amplifier stages having a bridge output, that may be equated to operational amplifiers connected by a bridge and supplied with a low impedance output stage; each stage has a fixed voltage gain that is internally set by the retroaction resistors (they are quite accurate and guarantee a maximum gain difference, between the right and the left channel, of just 0.5 dB) of these operational amplifiers, that is equal to 32 dB, corresponding to about 39 times the original signal. This means that by supplying an effective voltage of 0.1 V as an input, we obtain 3.9 V as an output. The maximum output power with a 8 ohm speaker is 15 watt, in order to obtain them we need an effective voltage of 10.9V; since the voltage gain is 39 times the original signal, in order to obtain such a power it is needed to drive each stage with 0.28 Veff. In order to obtain the same power at 4 ohm, since we need a voltage on the load that is equal to 0.707 times the one required on 8 ohm, 198 mVeff are needed as an input. Anyway, please pay attention to the fact that for each channel, the TDA7297 may supply a peak current of 2 ampere, and under a sinusoidal regime that means a bit more than 1.4 ampere; this value is more than enough to supply 15 watt at 8 ohm, but it allows to reach a maximum of 8 watt at 4 ohm; it is therefore possible to connect 8 ohm amplifiers, but the power obtained is less than the one obtained at 8 ohm. 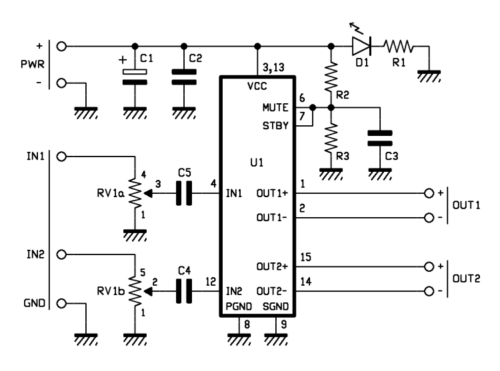 Only very few external components are needed by the integrated circuit, since internally it has everything it needs: the polarization networks of the operational amplifiers’ non-inverting outputs, that are needed since the integrated circuit is powered with a single voltage, the R/C series networks (Boucherot cells) in order to compensate the impedance variations of the speakers and to prevent the self-oscillations, in addition to the bootstrap networks that are needed for the purpose of stabilizing the polarization when the component is started.

This makes the diagram a very simple one, as you may see from these pages: in fact the integrated circuit is surrounded only by two capacitors for the uncoupling of the L and R inputs (C4 and C5) in the direct current, and by a resistive voltage divider, in addition to a filter capacitor for the inputs of the Mute and Standby functions; more specifically, the C3 capacitor allows – when the circuit is started – to silence the outputs of the amplifiers, so to avoid the classic “bang”, due to the initial adjustment of the polarization networks; it is better to prevent it, because it is both annoying and a strong stress for the speakers, and specially for the low frequency sigmals. The Mute function is activated by setting the pin 6 to logic zero, as for the Standby function it is activated by setting the pin 7 to level zero, therefore we are able to manage both of them with a single network; as an effect of the capacitor, that is uncharged when the circuit is powered, initially the power stages are switched off and the Mute blocks the audio signal for a time that is equal to about 100 milliseconds, once they have passed it lets the TD7297 to operate normally. The capacitor is discharged by means of the R2 resistor, and once it is switched off (that is to say, when deprived of power) the circuit is discharged via R3; if there wasn’t such a resistor, the load would remain for a long time and at a following close restart it would not allow the activation of the Mute and Standby functions. 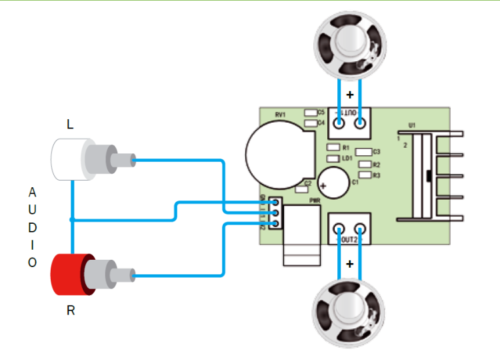 The manufacturer advises to switch the TDA7297 on, only after having deactivated the Standby and then the Mute function, in this order. Since the deactivation threshold of the Standby function is 0.9 volt (therefore, when the voltage suppllied by the C3 capacitor grows to 1 V, the integrated circuit goes to full speed) and the one of the Mute function is about 2.9 volt, the connection that we created is fine, in the sense that we may use a single RC network in order to drive the command pins for both functions, being sure to respect the correct starting sequence. The single network is fine for the switching off as well, since ST recommends to set the integrated circuit to Mute and then in Standby mode, and this is respected as well, since as the voltage drops on the capacitor, the Mute is first activated, and then the Standby mode, too. 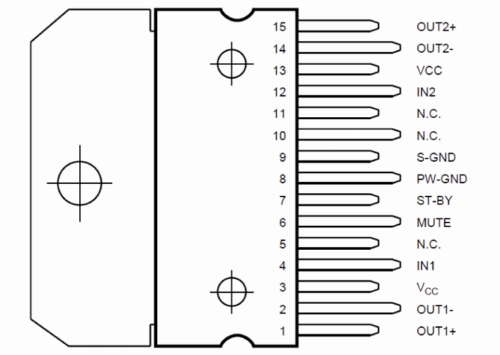 The integrated circuit’s outputs are directly connected to the speakers: even though the circuit operates with a single voltage, no uncoupling capacitors are required, since the speaker of each channel is connected between the outputs of the two power stages of the corresponding channel.

Each input has a potentiometer (actually a cross-section of a dual potentiometer) in order to measure out the signal’s level that reaches it and therefore to obtain the control of the volume, it reaches the maximum when the pointer is found towards the IN contact, and it reaches the minimum when it is at ground.

On the power source line, the C1 and C2 capacitors have been located; they have the purpose to filter both the pulse disturbances and the possible ripple of the power source that has been used, and the voltage fluctuations caused by the absorption variations on the part of the integrated circuit at high output power levels. The presence of power voltage (that in order to obtain the maximum power at 8 ohm must be of about 16.5÷17 V), is signalled by the lighting up of the D1 LED, that is polarized by means of the R1 resistor.

As for the applications, the circuit may be used – in addition to the usage as an amplifier for fixed applications (as bench power amp, hi-fi amplifier) – as a small booster for car radios that are not supplied with an amplification: it is excellent, for example, for the purpose of amplifying the signal provided by a MP3 reader.

Whatever will be the way you are going to use it, please keep in mind that the container or housing in which you will place it must have wide openings, so to allow the TDA7297’s dissipator to dispose of the heat produced by the integrated circuit; please avoid the dissipator to touch possible metal parts of the container or housing, since even though the metal winglet is connected to ground, it is always better to avoid parallel paths to ground, that may create interferences that could be heard through the speaker.

In order to limit the interferences, such as for example the buzz induced by the 220 V electric network, it is useful to enclose the circuit in a metal container; as for the ventilation, you may have the dissipator to come out from a small window, or to consider the idea of creating some grids. Please remember to connect to ground (of the power source) in a single point of the container, and to insulate the metal part of the input connectors (please use the RCA) from the container, even if – from an electrical point of view – it goes to the circuit’s ground. 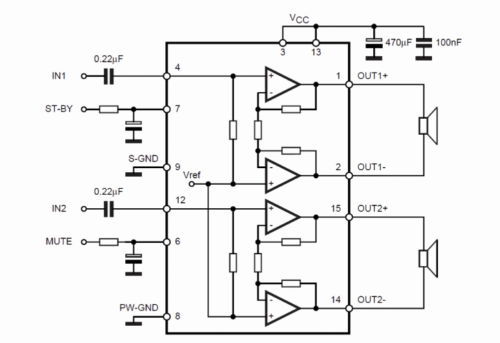