Software and firmware for TiDiGino (GSM remote controller with Arduino) 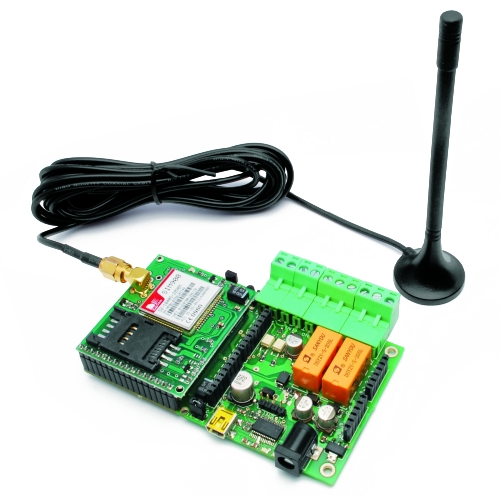 A lot of people who bought the TiDiGino ask me how to test it.
The Gsm Remote Control is provided with bootloader, so you have to insert the prefered sketch that you can find in code.google.
Daniele Denaro wrote a good sketch for TiDiGino, and I’m reporting his tutorial.
Ask me (and him) all do you need.
Author Daniele Denaro

Be careful, because you have to manipulate the environment of development (IDE) 1.0 to insert the new hardware.
In particular replace the file “boards.txt” (see below).
In this new version of the file has been added to the section on hardware TiDiGino.
You should also add the folder “tidigino” that “boards.txt” references (see below).
The changes will be visible to restart the IDE.

– It was introduced double message mode for alarms. Meaning now is also detected the return to the base level (end alarm) with the possibility to be notified by a second message.

– It is advisable to perform a reset procedure to be safe pressing both the switch P1 and P2 on the first start after installation.

– Fixed some errors in the Java program.

NB. If you have an unmodified hardware TiDiGino, should arrange removal 100-ohm resistor R20 (near the USB connector). Because otherwise…
TiDiGino remains constantly in reset and will not start unless it is also connected to the USB.
(As distinct from the opening of the JP2 jumper that only affects the transparency serial link to the functioning of the operating TiDiGino)

The download includes:
– Installation of this file
– A Italian handbook pdf: TiDiGinoMan.pdf
– A quick Italian reference guide to the controls and the installation and startup: TiDiGinoShort.pdf

– A folder “FirmwareTiDiGino” containing the firmware for TiDiGino;
“TiDiGinoMainV12.ino”: main sketch;
5 modules in the folder “modules”:
“Commands.c”: Commands and their management
“Phone.c” Management Procedures GSM
“Pins.c” Definitions of corresponding pins of the Arduino and global variables
“StateVariables.c” Variables to store the state of the controller and procedures for EEPROM
“Utility.c”: Various procedures used by other modules

– An executable jar file “TiDiGinoW32.jar” and “TiDiGinoW64.jar”
(Containing the Java application interface for Windows32 or Windows64)
(Just extract the files in a directory and appropriate “to click” above)

– A “Library” folder containing (for convenience) Arduino libraries used.
To be installed in the directory “libraries” of the Arduino software (if not already present)

– File “boards.txt” that replaces the same name in the “hardware\arduino”. This file has been added TiDiGino the platform that you will find it listed along with the other (after restarted the IDE). This file is pointing to the directory “Tidigino” of “variants”

– The folder “tdigino” that contains the file “pins_arduino.h” which realizes the map particular hardware of TiDiGino. This folder should be added to other in the templates folder (the folder “hardware\arduino\variants” of the environment Arduino 1.0)

N.B.
To load the sketch of TiDiGino must first edit the path of inclusion forms.
In fact we used the absolute path to solve the problems with the Arduino compiler.
The inclusion of modules is obviously “TiDiGinoMain.ino”.
The easiest thing is to create a folder in the workspace Arduino “TiDiGinoMain”, copy the file “TiDiGinoMain” and the Forms folder, then edit the file, changing paths, and finally activate the upload.
Attention! At the first start after the upload, press P1 and P2 to reset and load the default values ​​to EEPROM.

N.B.
The application interface is in Java (and so you must have Java installed) but it is only for WINDOWS environment because of the library bill for the management of the serial port.
(If the jar was not associated with java you can run it from the console window command “java-jar TiDiGinoWxx.jar”, or creating a link using “javaw-jar TidiGinoWxx.jar”)
Keep in mind that every time you open the serial port you have a firmware restart unless you open jumper JP2 (near the USB connector) that prevents the software reset of Arduino.

N.B.
The software is “open source” and therefore disclaims any liability arising from its use.