Say hello to the new Raspberry Pi 3 Model B+

The long journey of the Raspberry Pi was started with its first version, which has been proposed to the public as a prototyping board for advanced applications thanks to the considerable computing power and the potential of the Linux operating system that ran on the processor. Raspberry Pi was the motherboard of a micro PC, where they took place CPU, RAM and GPU, plus a large series of standard devices such as USB, Ethernet, HDMI and audio, and other dedicated, such as CSI ( input for the Raspberry Pi camera) and DSI to interface with LCD panels such as laptop computers.
The mass memory was and is still an SD-Card, to be inserted in the appropriate slot, but the Raspberry Pi board already looked at the boot from a hard disk connected via USB. From its first appearance, the development team “churned out” various versions, passing through the milestone Raspberry Pi 2, marking a new era in single board PCs and integrating new features like I²S audio output, a new SoC and more “improvement”.
The most significant upgrade of the Raspberry Pi was certainly that of version 3 for the implementation of the WiFi connection on board. 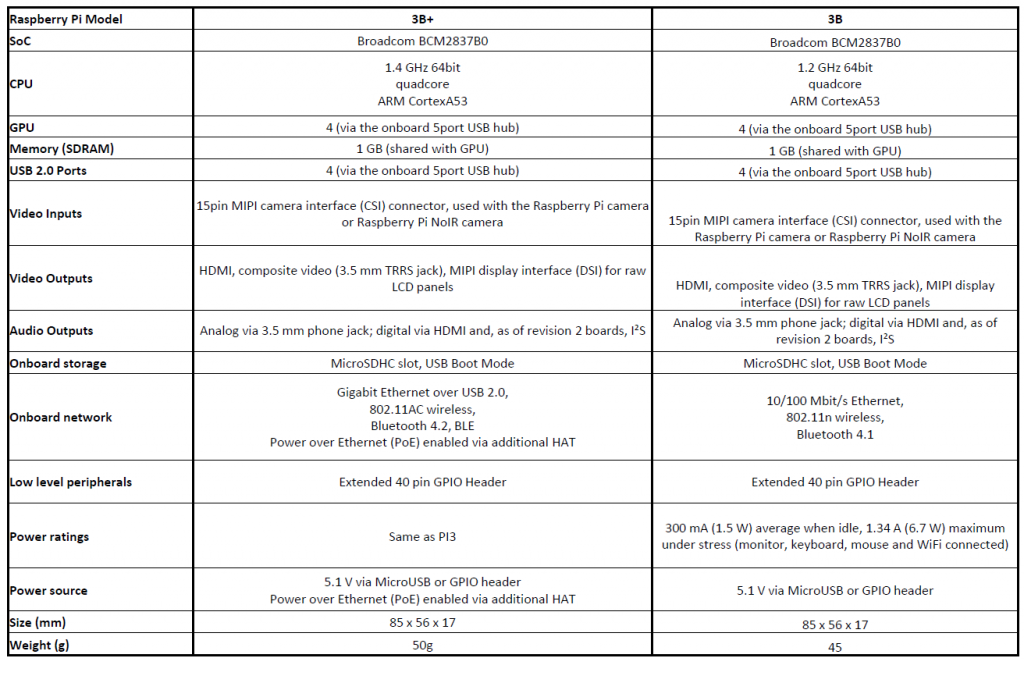 Today the team that created the popular “raspberry” card has decided to add a touch of perfection to the already excellent Raspberry Pi 3 model B, improving some aspects to make it even more interesting.
Thus was born Raspberry Pi 3 model B +, where the + indicates the addition of distinctive features that we report in the table above, where you see the comparison between the data of the model B and those of the model B +, so as to easily make the comparison.
The SoC remains the same, based on 64-bit ARM Cortex A53 quad-core CPUs, but the clock rises, reaching 1.4 GHz. On the side of network connectivity, the WiFi (IEEE 802.11ac) onboard based on 2.4GHz and 5GHz IEEE 802.11.b/g/n/ac controllers, but the speed of the Ethernet increases, which becomes Gigabit, although it is supported by the USB 2.0 controller of the card and therefore limited, as stated in the official documentation, to a maximum throughput of 300Mbps. So the ethernet can negotiate connections on a Gigabit Ethernet network but it works at 300 Mbps, that is faster than a 100 Mbps but slower than Gigabit.
The dual-band wireless LAN comes with modular compliance certification, allowing the board to be designed into end products with significantly reduced wireless LAN compliance testing, improving both cost and time to market.

Dual-band wireless LAN and Bluetooth are provided by the Cypress CYW43455 “combo” chip, connected to a Proant PCB antenna similar to the one used on Raspberry Pi Zero W. Compared to its predecessor, Raspberry Pi 3B+ delivers somewhat better performance in the 2.4GHz band, and far better performance in the 5GHz band, as demonstrated by these iperf results from LibreELEC developer Milhouse. 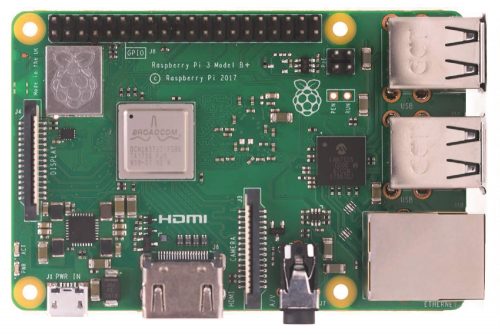 Furthermore, an important innovation is the support for Power over Ethernet (POE) obtained through an additional HAT module, that is a dedicated shield that supplies power. The shield also allows you to feed the entire board bypassing the micro-USB connector, which would become unnecessary, then in PoE mode the Raspberry Pi model B + turns into a network device that can be powered from the PoE hub or switch or other master devices.

This graph, courtesy of Gareth Halfacree, demonstrates that Raspberry Pi 3B+ runs faster and at a lower temperature for the duration of an eight‑minute quad‑core Sysbench CPU test.
Note that Raspberry Pi 3B+ does consume substantially more power than its predecessor. We strongly encourage you to use a high-quality 2.5A power supply, such as our 3A Power Supply. 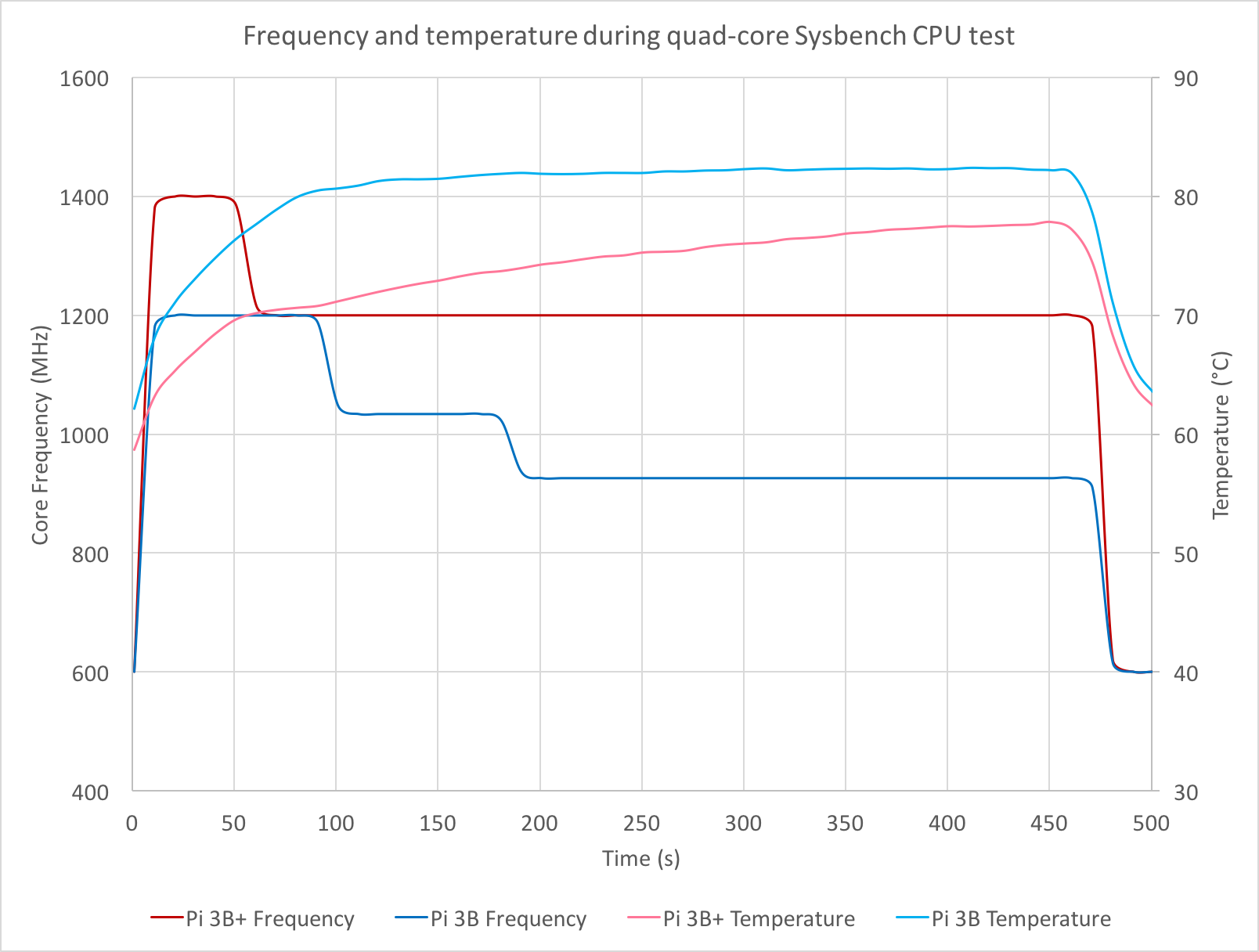 Still on the subject of connectivity, now Raspberry Pi supports the Bluetooth 4.2 LE mode, the most advanced of those classified as Bluetooth Smart and already suitable for WPAN support. Video inputs and outputs maintain layout and features, as well as the GPU section and the amount of RAM, which remains 1 GB and is shared with it. We reconfirm H.264 multimedia support, MPEG-4 decoding (1080p30), H.264 encoding (1080p30) and OpenGL ES 1.1, 2.0 support.

Eben Upton, CEO Raspberry Pi Trading said: “The launch of the Raspberry Pi 3 Model B+ is about providing industry with a board that is perfectly suited for use in embedded products.  The Raspberry Pi has already proven itself to have strong stability, high quality and ease of use combined with an attractive price point for all markets.  This supercharged Raspberry Pi 3 Model B+ takes it one step further, easing compliance certification, reducing cost and time to market and all at the same price of $35, making it perfect for all applications” 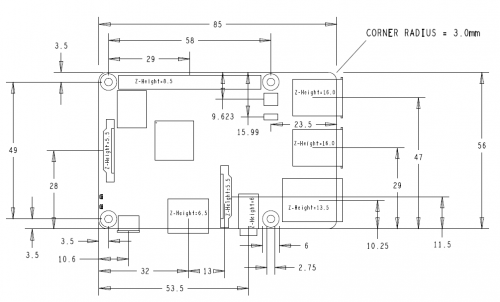 The new Raspberry Pi 3 B+ is available in our store