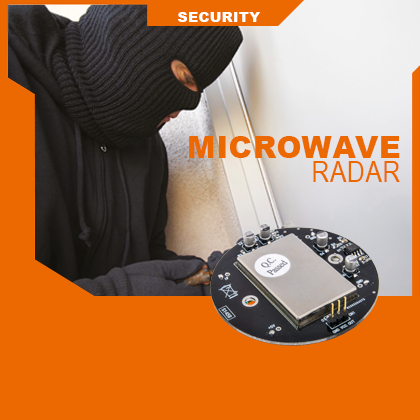 Motion detector based on the Doppler effect, made by combining a specific sensor with a circuit that amplifies the output signal.

Now the devices used in presence and movement detection systems, to be combined with automations for opening doors and turnstiles but also with anti-theft and anti-intrusion systems, stand out passive infrared radars (otherwise called PIR) and microwaves, which, compared to the first ones, have the prerogative of being able to detect even just the presence, but above all to be able to do so even if the person or object is behind walls and doors, provided that they are not made of metal or contain armor metal.

In the past we have already dealt with microwave sensors, using a dedicated breakout board in the corresponding project (the corresponding article is the one published in the file n° 227 of July / August 2018) and today we want to return to the topic by proposing a new project developed around a powerful radar operating in the X band and precisely at 10.525GHz (this is the typical frequency, but the sensors marketed in Italy usually operate at 9.9 GHz), capable of detecting the movement of people and objects in their range action.

The sensor to which we refer is the popular HB100 (produced by Agilsense, www.agilsense.com) which is a device made on an SMD printed circuit, containing an oscillator that emits microwave from a special antenna pointed at the front and receives from an antenna receiver, mixing the two signals in an RF mixer and thus exploiting the Doppler effect. The electronics are enclosed on the front by a metal cover (Fig. 1) which also contains the microwave antennas. 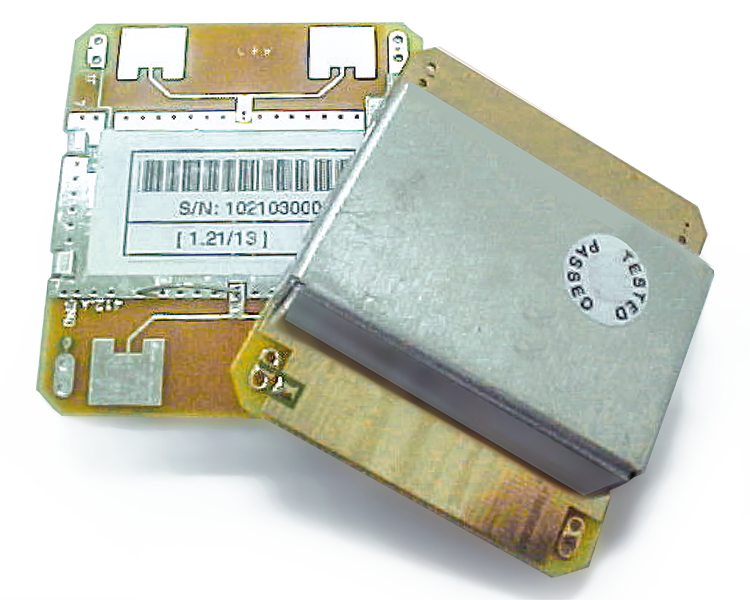 Before proceeding, it should be noted that HB100 is actually a family of microwave radar, whose components are essentially distinguished by the frequency of agreement of the local oscillator.

Our HB100 (the one used in the project described in these pages) is a Bi-Static sensor based on a DRO oscillator and a pair of Microstrip patch array antennas.

Then the sensor works by pointing very direct radio waves in the frontal direction and detecting the reflection on the objects it encounters through a receiving stage (front-end) whose signal is mixed in an AF mixer with that of the internal oscillator, which is the same which pilots the radiating antenna; from the mixer comes an average frequency (IF = Intermediate Frequency) of a value equal to the difference between the radiated frequency and the one that is received, which will differ if the waves have been reflected by a moving body, precisely because of the Doppler effect.

The IF signal is therefore the one that gives us the indication on the detection of something moving in front of the sensor and exists only when there is a difference between the frequency transmitted (i.e. generated by the local oscillator) and the received frequency, the latter dependent by various factors such as the mass and the speed of movement of the body on which the reflection takes place (target) and more.

The irradiation diagrams on the horizontal and vertical planes of the RF waves are shown in Fig. 2 and allow to understand which are the optimal detection areas of the radar.

To use the IF signal in most practical applications, you need a “conditioning circuit” or an amplifier, basically, that makes the level high enough to be able to then send it to the ADC of a microcontroller (such as the Arduino one) or to a voltage comparator that switches its output based on the exceeding of a threshold that we can consider both that of alarm and which in practice would correspond to the size or reflection capacity of the body in movement, as well as the speed of movement of the body itself .

The circuit that we present in these pages is therefore a voltage amplifier which first of all strongly raises the level of the signal provided by the IF output of the microwave radar module and then filters, by cutting it at the top, the frequency band, so as to clean the signal from disturbances and spurious escaped from the module.

So let’s take a look at the wiring diagram, shown on the next page, which shows us a two-stage amplifier in cascade, made with the two operational ones contained in a traditional LM358; the first amplifier works in a non-inverting configuration and the second (the output one) in inverting mode, therefore the output signal will be in phase opposition with respect to that received by the output of the microwave module.

The whole has a high voltage gain because the signal supplied at the sensor output has an amplitude of the order of a few tens of microvolts; to be exact, the gain (G) of the first stage is given by the formula:

and, considering the values of the components, it is equal to 101 times in voltage. The formula does not take into account the capacitive reactance of the capacitors present on the feedback network, which at negligible working frequencies, i.e. the typical ones taken from the IF of the microwave sensor.

The second stage is calculated in a slightly different way, being an inverting amplifier; more exactly, the formula is:

The gain G is therefore worth about 122 times. Also, for this stage the considerations just made regarding the reactance of the capacitors are valid.

Being, the two amplifiers, in cascade, the overall theoretical gain is given by the product of the single gains, therefore it corresponds to 12.322. So a signal that enters U1a with a width of 10 microvolts leaves a 0.123V wide U1b and therefore enough to be read, for example, by the A / D converter of an Arduino board or any microcontroller. Since the circuit is powered at single voltage with respect to ground, both operational ones are polarized at rest with half the power supply potential and, thanks to the capacitors inserted in the feedback network, in continuous mode they have unitary gain, so as to always return to the output at rest, half the supply voltage. This measure is essential because otherwise the excursion of the operational voltage output would only be for positive and not negative values ​​with respect to the reference at rest; by placing the output voltage at half the power potential, the amplified variable signal can oscillate by the same amplitude above or below the reference voltage, therefore the operational ones can amplify in a symmetrical way. 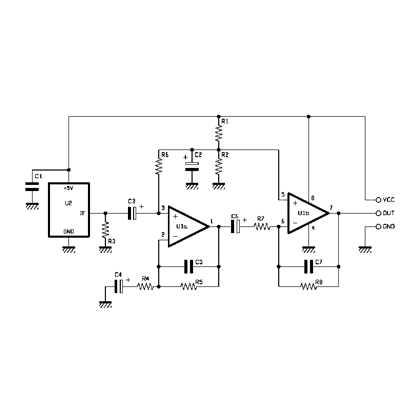 The polarization of the case is obtained by obtaining half the potential of Vcc with the resistive divider R1-R2, then applying this voltage to the non-inverting input of U1a (pin 3) by means of R6 and to the inverting (pin 2) of U2 directly; the electrolytic capacitor C2, properly calculated, at the working frequencies practically short-circuits the signal, which is necessary because being the polarization network common to the two operational, without this bypass the input signal of U1a would end up at the inverting input of U1b, skipping of fate the first stage.

Note that each amplifier stage has a small value capacitor on the feedback, the purpose of which is to determine, together with the resistor to which it is connected in parallel, a “pole” or a higher cut-off frequency that prevents the AF spurious escaped from the radar module from being amplified and propagated on the output line, leaving to process only the signal coming out of IF, which is natively at low frequency.

The entire circuit is powered with 5 volts, via the Vcc and GND contacts and the voltage supplies both the double operational voltage and the HB100 sensor, which inside has the power supply filter capacitors necessary to prevent disturbances originating in the oscillator can exit through the power supply.

As for the practical applications of the sensor, remember that it can be used to reduce false alarms in anti-intrusion systems in combination with passive infrared radars (the popular and cheap PIR), but also for detecting people or cars in order to open automatically motorized doors and gates, that is to turn on lights; it can also be useful in detecting the speed of vehicles, by virtue of the fact that the IF signal depends on the speed of movement for the same mass and surface area of ​​the target object. In this way, you could build a speed camera.

In any case, the circuit used to read the signal supplied by the sensor must be able to measure the frequency supplied, since it is from it that information is obtained on the speed of movement of the body and therefore on the fact that something is moving or not in front of the radar; the microcontroller of the case -because this is what we are talking about- will have to establish a frequency threshold below which to ignore the movement and beyond which it can be assumed that something moves in front of the sensor, effectively establishing the sensitivity of the detection.

valid, as always, under the conditions that the object moves rectilinear motion away from the HB100 sensor.

So, for example, if we read a frequency shift of 183.3 Hz at the IF output or in any case on the OUT of the amplifier, in these conditions we can believe that the detected object moves at a speed of 10 km / h.

For the use of the sensor it should be borne in mind that the sensitivity field on the vertical and horizontal planes is that described in the polar diagrams proposed a few pages back in Fig. 2.

In this article we have proposed the combination between the microwave radar sensor of the HB100 family and a signal amplifier, indispensable for example to let a microcontroller equipped with integrated ADC acquire and manage the medium frequency signal resulting from the beat and therefore result of the detection of an object.

The circuit can form the basis for obtaining even a stand-alone detector based on a comparator which establishes a threshold beyond which detection has taken place.

But the combination with a microcontroller in which a suitable firmware runs, can allow for example to detect the speed of a moving object based on the difference in frequency (Doppler Shift) read at the IF output.