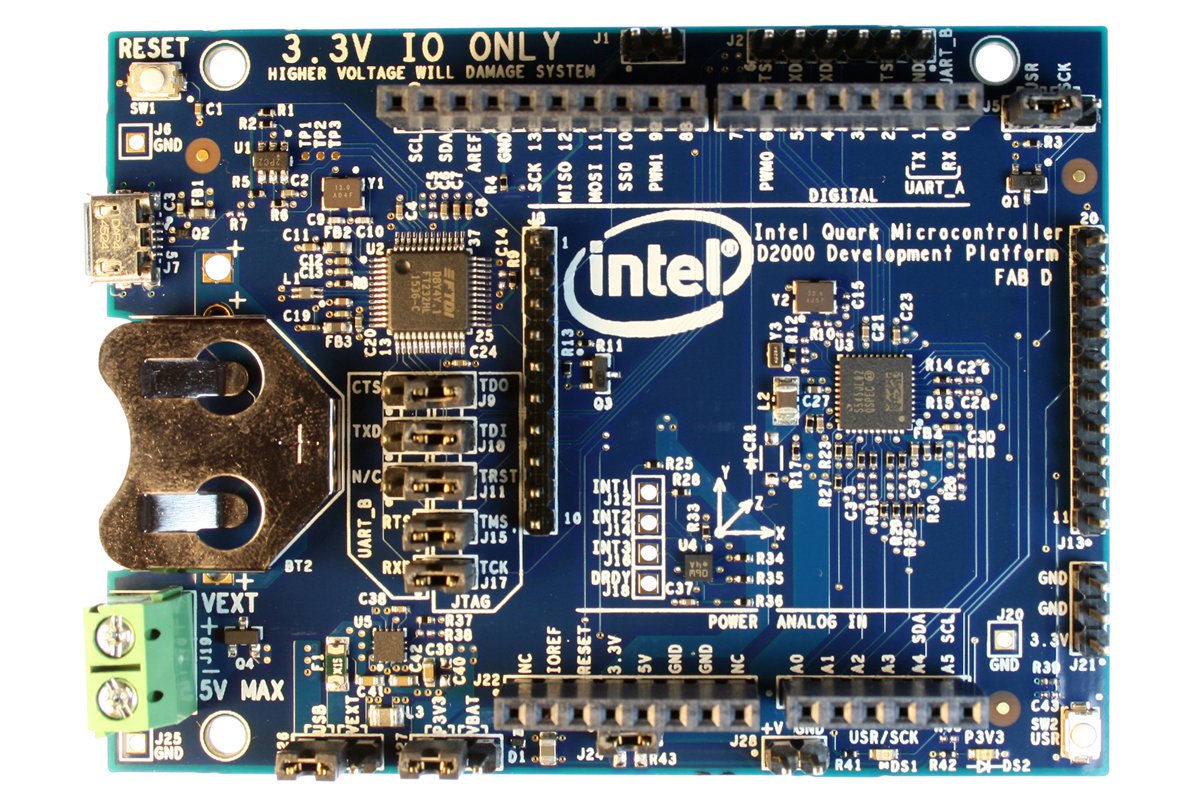 The density of the microcontroller universe continues to increase. New entries appear regularly. Some seem to disappear quickly while others continue with a loyal, albeit sparse, following. A few have a significant and enduring impact.

The board boasts an impressive list of features including:

For a small board at a relatively small price, the D2000 appears to have a great deal of capability and potential.

It is a fairly small board, but somewhat larger than the familiar Arduino UNO. Several components on the board lurk conspicuously – the QUARK SoC, an FTDI FT232H (Hi-Speed USB UART) and a Bosch BMC150 (3 axis magnetic field sensor and 12-bit, 3 axis accelerometer). There is also a coin cell battery holder (high capacity CR2450) and Arduino UNO style SIL sockets.

The D2000 is basically a 3.3v board (operating range is 2.0–3.3v). With on-board regulators, it can be powered through a USB connector and, alternatively, there are also screw terminals for an external supply. All I/O is 3.3v. There is a good deal of I/O functionality and, as you might expect, it comes at the cost of multiplexing. That is, 25 I/O pins can be configured as GPIO or other functions (e.g., I2C/UART/SPI/JTAG). In this regard, there are four user mode configurations. In addition to the user modes, there is a pin test mode. The GPIO have programmable drive strength (12 mA and 16 mA modes) and integrated pull-ups. The additions of an RTC and watchdog timer are appealing. There are up to 19 analog inputs as ADCs or comparators. ADC inputs are programmable (6/8/10/12-bit) resolution. Analog comparators are fast speed (6) or slow speed, low-power (13) with wake-capabilities. Clearly, this board was designed with flexibility in mind.

If you have used Intel Galileo, or Galileo Generation 2, or Edison boards, you may be used to using an Arduino IDE or an embedded Linux OS for program development. The D2000 looks like a notably different approach from those environments. Program development with the D2000 is with the Intel System Studio 2016 for Microcontrollers. The free download suite contains what you would expect in an integrated tool chain and much more. It is advertised as including: