OpenPump is a new open-source hardware project to build a better syringe pump, a device that dispenses fluid or paste over a set amount of time. You'll most often see them being used in laboratories and hospitals. In hospitals they are used for delivering medication for treatments like chemotherapy and pain management, while laboratories use them for everything from microfluidics to bioprinting. You could even use a syringe pump for 3D printing with chocolate in your kitchen. 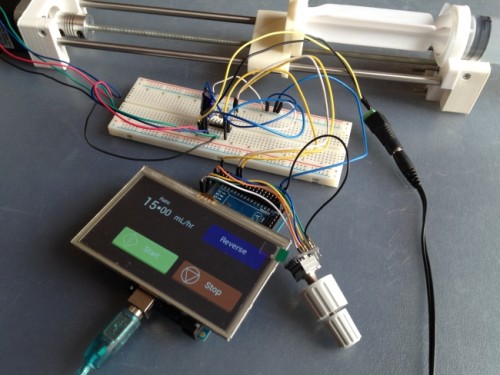 The current mechanical design of OpenPump is based on a linear actuator design created by the Michigan Tech Open Sustainability Technology Lab. OpenPump is a stand-alone device with the focus on designing a great user interface, making syringe pumps easier and safer to use.

Syringe pumps currently on the market can cost anywhere between $500 and $10k, depending on the number of features and its application. OpenPump can be built for 5-10% of the cost of a pump of similar performance, making it an attractive option for cash-strapped labs and DIY biotech spaces.

Our hope is that one day these open-source hardware syringe pumps can be used in hospitals as well. Not only would they reduce the costs associated with healthcare, but they have the potential to be safer than existing proprietary versions. Preventable hospital error is the cause of about 17% of all deaths in the western world. If it were considered to be a disease, it would be the third largest killer, just behind cancer and heart disease. Over half of all device errors are estimated to be due to some form of use error. It seems that standards and regulation do not have the desired effect, with almost 600k adverse device-related events reported in the US alone in 2013.

Syringe pumps are commonly used in hospitals to infuse medication over time by pushing down on the plunger of a syringe connected to a patient. The first portable electronic syringe pump was developed back in the 1970s by Dr BM Wright in the United Kingdom, and the technology has not changed much since then. This same device has been in use in hospitals all over the world for decades, and has only recently been phased out in the UK due to safety concerns.

Another example of a small syringe pump is the insulin pump used by diabetics to control their insulin levels. A recent New York Times article looked at the costs associated with these devices. To treat diabetes using an insulin pump with all the extras, like the infusion set, insulin, test strips and lancets added up to a total of $26,470. Let’s focus on just the cost of the pump: $7,250. For comparison, a brand new iPhone 6 Plus will only put you back $649. So why is this little device more than 10 times as expensive? According to the article, companies said that:

the higher costs reflect medical advances and the need to recoup money spent on research.

A spokesperson for Medtronic stated:

We are committed to reinvesting in research and development of new technologies to improve the lives of people with diabetes, and our current pricing structure ensures that we can bring new products to market.

Let’s face it, the technology behind an insulin pump is not that complicated. It’s a little battery-operated stepper motor that pushes down a plunger. It has a few buttons and a small screen. Some of the newer models have a Bluetooth chip inside to communicate with your phone. It’s difficult to imagine that the manufacturing cost is much more than $100 per unit, and I would guess most of the R&D costs have been recuperated a decade ago.

So what else can make the device so expensive? A lot seems to be spent on marketing. There’s also a cost related to the technical support of the device. How about certification? Getting your device certified can be time-consuming and expensive. If the device is a substantial equivalent of an existing medical device, around 100 pages of documentation are required, it takes about 3 months to certify and costs about $4,000 in the US under FDA regulations. However, a completely new device requires around 300 pages of documentation for pre-market approval (PMA), takes around 6 months and costs around $260,000, or $70,000 if you’re a small-to medium sized enterprise. To test a medical device clinical trials need to be performed. For a low-risk device, 30 participants are needed, and time from concept to market is around 2 years. For a high-risk device, 150 participants are need for the clinical trial, and concept-to-market time is around 5 years.

5 years can be a very long time for a startup company. Is it possible that there just isn’t enough competition to drive the price down? Medtronic has around 65% of the insulin pump market and maintains it position by using proprietary connectors, software and disposables to lock patients into their ecosystem, similar to how Apple and Google have ecosystems for their devices and software.

There is a better way. If the software to connect to the pump is open source and the interfaces standardised, vendor lock-in can be prevented. With an open source hardware pump, technical support can be provided by hospital staff, and interfacing the pump to other devices, like continuous glucose monitors, becomes a lot easier. It increases safety and security by allowing more people to inspect and improve the code and designs. It also allows multiple manufacturers to use the same design and differentiate in other ways in order to compete, for example usability, support and interoperability with other devices. As Joshua Pearce said in his book Open Source Lab:

Open-source hardware creates products driven by capitalism rather than monopolies, an open environment for sharing information, and a powerful opportunity for companies and individuals to learn from each other.

In some areas of healthcare the technology seem to have stagnated and the costs artificially inflated. How can open source provide solutions to these problems?

Open source development has been called distributed research and development, as it allows people from all over the world to contribute and collaborate on the design and development of software and hardware. Eric Jennings from Pinoccio, a hardware development board for the Internet of Things, only realised after they’ve open sourced their designs how many people wanted to contribute to the project. A retired engineer re-designed the entire power supply component – they wouldn’t have been able to employ him even if they wanted to.

There are a number of challenges for open source hardware in healthcare. Medical devices need to be regulated, and this can be time-consuming and expensive, but I think this is still quite manageable for a decent-sized open source project. Open source software projects have shown that they’re quite adept at generating good documentation, and crowdfunding is one way of getting the funds together to apply for certification.

Clinical trials for medical devices can take anything from 2 to 5 years. While 5 years can be a very long time for a small business to be able to sell their first product, performing the design and development, and possibly even the clinical trials, as part of an open source project means that a small business would need to be in operation for a much shorter time before they can successfully launch a new product.

Another advantage of open source hardware is that device owners can perform repairs and customisations themselves. At first glance this would seem undesirable for medical devices, until you consider that there are medical physics departments within hospitals with substantial expertise to repair devices. At the moment they are operating with one hand tied behind their backs, not being allowed to repair proprietary devices that have to be sent back to the manufacturer for repair, substantially increasing the time that the device is out of service.

What can I do with a syringe pump?

Apart from its use in hospitals, what can you do with a syringe pump? If you have an aquarium, it can be used as a dosing pump or metering pump: Instead of hacking an existing pump, you can build your own OpenPump to take care of the fish in your aquarium, for example maintaining the proper calcium and alkalinity levels in the tank.

Maybe you’d like to build your own bioreactor? Photobioreactors can produce biofuel using algae, as well as food, fertilizer and other chemicals. Fermentors, another type of bioreactor, are used to create raw materials like ethanol, lactic acid, as well as fermented foods and drinks. OpenPump can be used to add nutrients and make the necessary pH adjustments.

The best part about using OpenPump is that it can be completely customised for specific needs. Need to use a different type of syringe? Edit a single value to change the syringe diameter in the 3D model, and print out the new part on your 3D printer (or order it from a 3D printing hub in your neighbourhood). 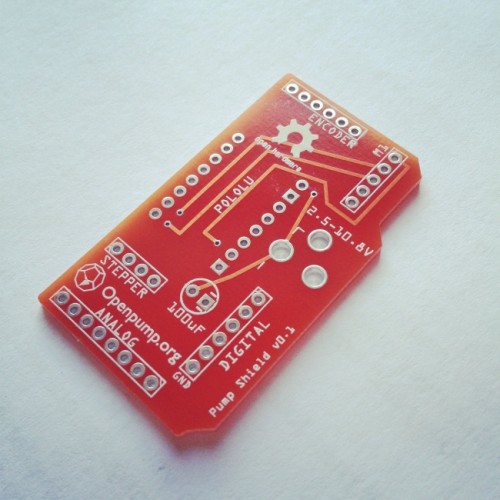 We’re hoping to get more people involved to help make OpenPump better. It’s continuously being improved: We’re currently working on an Arduino shield so that you can just plug in all the different modules (touch screen, stepper motor and rotary encoder) with no breadboard required. It’s designed to fit into an Arduino Mega together with the touch screen shield. The OpenPump shield is being designed using the awesome open source circuit schematic tool Fritzing. Fritzing lets you create your design using a breadboard view, where you place the components on the screen to look exactly like your design on your breadboard. When you’re done, Fritzing automatically converts your design to a circuit schematic. 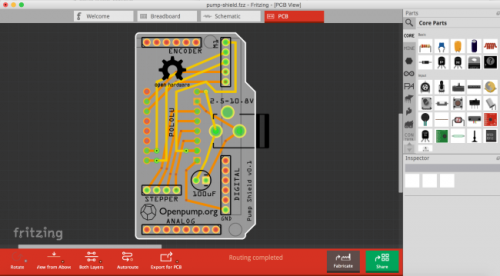 To get a better feel for what the manufactured board will look like, it’s useful to print the board design on regular paper. These paper templates can then be used to see make sure where the components will be placed on the board and what the silkscreen layer will look like. 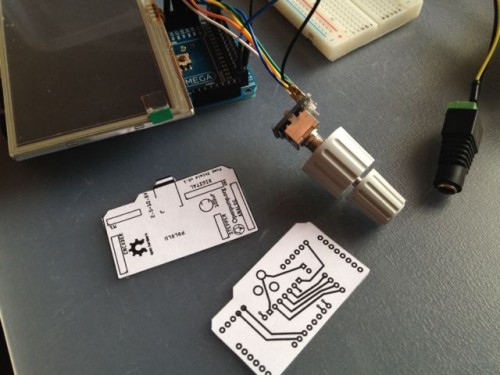 At the moment OpenPump consists of the linear actuator, a 480×272 colour touch screen designed by James Bowman, an Arduino MEGA2560, our own OpenPump shield and a dual concentric rotary encoder.

We’re also busy designing an enclosure for the OpenPump controller, so that all the electronics fit neatly inside a 3D-printed box. The enclosure was designed in OpenSCAD, a great piece of open source CAD software for parametric 3D designs.

We went through a couple of iterations of the enclosure design, to make sure that the touch screen fits snugly inside the case. If you want to learn how to design your own 3D-printed enclosure using OpenSCAD, check out the tutorial on the OpenPump blog.

I’m looking forward to see what you do with it!