Recently a lot of RF light bulbs with smartphone enabled control has been on the market, the most known and expensive is the Philips Hue, but other cheaper solution like the Mi-Light has been out for a while. All offer a smartphone app to control remotely the brightness and the color, but none is Arduino compatible like the LYT. 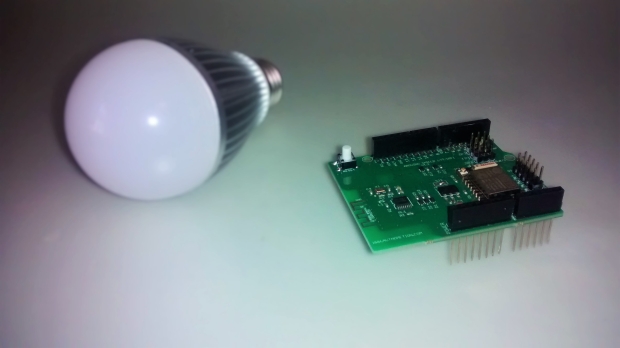 The market has been flooded with radio controlled LED lamps, mostly are bulbs with an embed RF 2.4 GHz radio that is bridged to your WiFi home network with a dedicated device.

The LYT bulb does the same, but instead of a general bridge they have an Arduino shield, so that you can control the bulbs from your Arduino with few lines of code.

There is no remote control, because you can build your own. In the video below is shown the use of LYT with SoulissApp, with standard and music based control. The video below show the review of the bulbs and the results controlling them using Souliss.

As you can see from the video, the bulbs react quickly to the commands and the white color is very bright, is an RGB+W and has dedicated high power LEDs for white as well for colors.

From the size and price point of view it mostly compare with other product on the market, the bulb is bigger than a traditional one but fits in most of the lamps. A single bulb sells at 24,90 euros that is mostly the price of other LED radio controlled bulbs out of Lifx and Hue that has a bigger price.

Is definitely a must have for makers and is probably the first “product for makers” because it brings the whole set of certification and safety requirement of a traditional home appliance with the openness of the Arduino and DIY world.

A step by step guide to get started with the LYT bulbs and Souliss is available here.