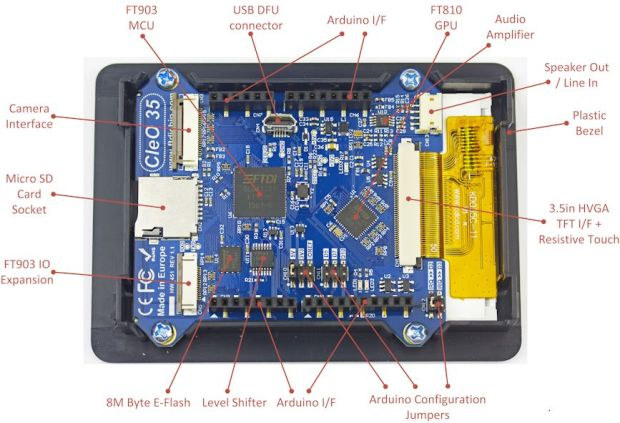 Makers and engineers now have a ridiculously easy way to add a high quality touchscreen display to the Genuino UNO without a lot of fuss. It’s called the CleO35 and seems ideal for projects that need a simple yet elegant human-machine interface (HMI). That’s nerd speak for the barrier between the human user and the digital device. The CleO35 was first introduced on Indiegogo, a crowdfunding site, by FTDI Chip.

Two new boards are rather interesting, as is the story behind them: NerO and CleO35.

NerO started with the Genuino UNO open source design, but has more power (1W) to drive accessories and CE-FCC certification for commercial use. NerO was on Kickstarter.com, also a crowdfunding site. CleO35 is a 100% hardware and software Genuino UNO compatible intelligent TFT touchscreen display.

NerO can drive the CleO35 to full performance, driving the CleO35 on a power-hungry all-white display without getting hot. And yes, Gordon assured me that the CleO works well with the Genuino UNO, but UNO is not able to power the Cleo touch screen display, optional CleO camera, and optional speakers all at once. UNO has difficulty refreshing if you flash the screen black then white rapidly. NerO was created for the highest-performance support of the CleO35.

So what is under the hood of the CleO35?

CleO35 gives you a respectable HVGA resolution (480×320) on a 3.5” TFT display, with a small form factor of 101.4mm x 73mm x 15mm. It supports both portrait and landscape orientations, and has a powerful FT903 310DMIP microcontroller so it can handle processing tasks while delivering 60 frames per second that are both anti-aliased and silky smooth. CleO35’s resistive touchscreen input capability is supported by FTDI’s FT810 touch controller microchip. The onboard USB port can power the screen but is intended only for debugging and firmware updates. CleO35 itself is a display and touchscreen, but also provides hardware to drive audio and has an interface for a camera. It can drive an external 8-ohm speaker while pumping out 1W of audio. FTDI sells a “plug-n-play” speaker module (CleO-SPK1). The same connector also lets you input audio. The device supports a mono line-in audio input so you can use an external audio source to drive it.

Come and check the boards at Maker Faire Rome 2016! 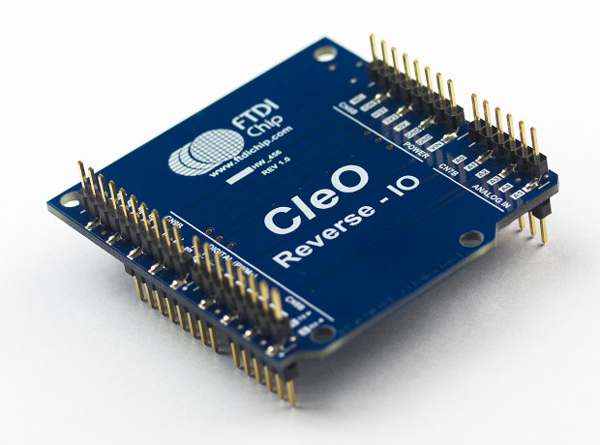