Creating a Network of Nodes with LoRa Shield 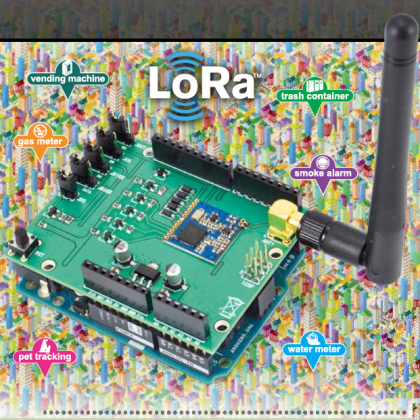 In this last post of the LoRa series we will see how to use the board, so to create a network composed of addressable and safe nodes. Semtech’s SX1278 integrated circuit, on which this shield is based, allows for a sophisticated and efficient communication in the LoRa (Long Range transmission) technology.

This communication is a bidirectional one and has a considerable cover range: about a hundred meters inside the buildings, or about a km in an open field. The board operates in the 433 MHz band and is a low cost one; it is therefore oriented to applications going from the “home automation” to the security, to the monitoring and the agricultural automation.

Since the communication is a bidirectional one, the board is suited to star and mesh network architectures: in the first case there is a privileged node, a reference for the other ones, that may only communicate with it; while in the second one each node may decide to communicate with any other one.

In the previous post we could see how to program the board for a point-to-point communication; in the said application, our attention was devoted exclusively to the verification of the communication conditions and in the reachable range. In fact the application was based on a transmitter that was sending a message and on a receiver that would echo it; no form of communication address was there, and if anyone wanted to use more systems at the same time, the only discriminating factor of the transmissions for the single units could be the carrier frequency. 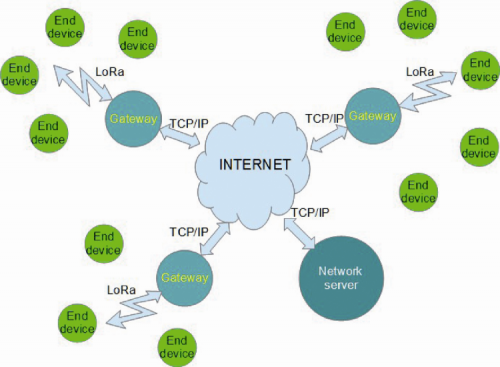 It is obvious that, in order to create any network structure, an address system for the single communications is needed. But that’s not enough: because of the range, that is not limited to a few meters, the transmission may be easily intercepted and thus it needs a protection system.

The LoRaWAN protocol is too complex for a more limited structure, such as a small private network for local usage. For this reason we thought to complete the LORA library by implementing an address structure and a protection that uses AES cryptography.

In the protocol we defined, a recipient’s address and one for the sender have been inserted. The address is a 16 bit one (word), that allows for 65,534 possibilities (with the 0 that has not been considered).

In order to make its usage more practical, the address has been divided in a network address and a “device” sub-address; however the subdivision is not a fixed one and may be decided by the user, in the sense that the address’ part that is reserved to the network – and consequently, to the peripherals – is a variable one. In practice, it is a matter of defining the maximum number of addressable peripherals (it must be a power of 2) and a network address being included in the space remaining in the effective address’ “word”. If the network address exceeds the value, the function will return “false”. Obviously, all the nodes will refer to this structure with the same network number and a different node address.

In Table  an example of usage of sending and receiving functions is shown.

Even if the application that you could have had in mind doesn’t have any real security restriction, it is not appropriate to make the radio packet travel in an unencrypted way, at the distances that may be reached by LoRa transmissions. For this reason we thought about a solution that could be reasonably safe, but also viable on a limited hardware such as Arduino.

Luckily, on the Internet it is possible to download an AES cryptography software, adapted for Arduino. This software, that uses the program’s Flash memory for some basic structures, has been slightly modified by us in the key’s management.

The AES cryptography we used is on a 256-Bit key size, but instead of supplying a 32 bit array, the key is generated in a pseudo-random way, starting from a seed value from Arduino’s random generator. This mode reduces the RAM occupation to a single number (integer), but it has the disadvantage of being usable for Arduino only. In fact, if different math libraries are used, the creation of pseudo-random keys, starting from the same seed, would supply keys that do not correspond among the various boards of the same network. 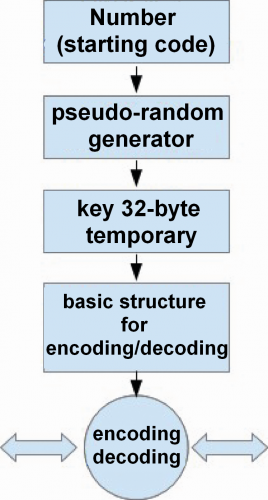 The AES cryptography with a 256-Bit key size is considered to be a very safe one, in fact the algorithm executes a certain number of transpositions and permutations by means of nonlinear functions, thus creating a completely masked sequence of bytes, that may be compared to the pure noise. Only the usage of the key enables the inverse procedure. Anyway, the library we used adds only a little weight to Arduino, both in terms of processing and memory occupation.

In addition to the AES cryptography, a byte has been added to the message; the said byte has a random value and has the purpose of making the identical messages (that repeat themselves) unique. More importantly, it has been thought in order to allow a possible implementation of an additional security, such as a rolling-code. Please keep in mind that, because of the king of cryptography used, the value of a byte gets scattered on the whole coded message.

The cryptographic key is directly defined in the activation function of the LORA library. The key’s definition is:

The packet sent and received in LoRa mode (that is to say, the payload) is therefore composed as shown in figure.

The delivery function builds it by adding the two addresses to the message (upon reconstruction, in word format) and a random value byte. Then the function encodes it (with the exception of the recipient’s address) and sends it. The addressee is not encoded, so to speed up the recognition at the destination. Once a packet has arrived, as a first thing the receiving function checks the recipient: if it corresponds with its address, the function will proceed, otherwise it will discard it. If it falls within the scope of its competences, the function will decode and verify if it was waiting it from the indicated sender (it may also accept messages from whichever sender). In the end, it returns the number of bytes of the message contained in the fitted buffer. It returns 0 if no message is incoming, or if the message is not among those that fall within the scope of its competences. In the case the message is arrived, it is possibile to ask for the sender or for the random marker.

The basic functions needed in order to use the board in LoRa mode inside a network structure that has been so defined are really a few ones. In Table  we propose a summary.

We will now show you a simple example that will highlight its simplicity of usage: it is contained in the library and in this context we will see its main features, and we will leave to you – the reader – the analysis of the complete listing. The example is composed of two sketches and represents a star structure in which a node queries the other ones, but it may also receive some unsolicited warnings in the case in which a certain event occurs on the peripheral. In our simulation the event is the action taken upon a button. 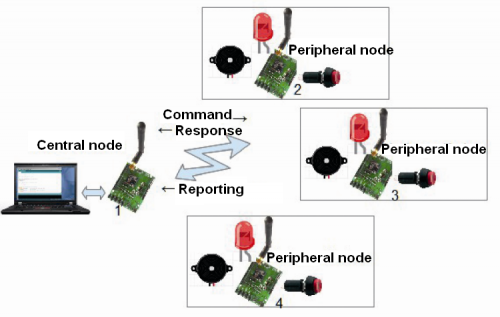 The first sketch represents the central node and has address 1 (anode address inside a network having 15 possible nodes). The sketch initializes the library and the board and then remains waiting for the reply that will be visualized on console. In the case of a spontaneous message, it will be visualized on the console. You will find the corresponding code in Listing 1.

On GitHub’s website, a page related to this project has been opened: there, in addition to the library, you will find applications that both we – and above all you – will want to share. The applications, as we already said, are almost endless: from the home alarm system to the management of sensors actuators for a small firm. 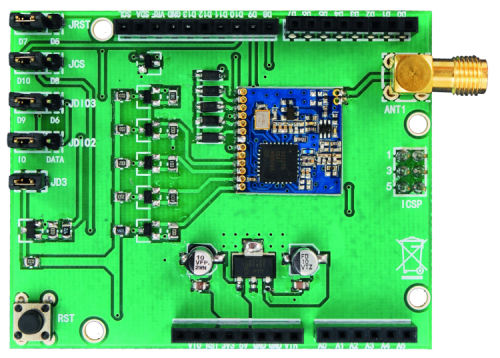