Arduino or Raspberry Pi? That is the question! 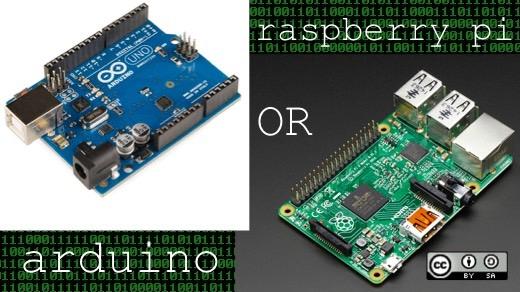 It is an interesting question, isn’t it?

People not “inside” the maker world or not expert in programming think that Arduino and RaspberryPi are two flavours of the same object. Like if you ask “Mac or PC” rather than “Ubuntu or Debian” if you’re nerdish.

Indeed, Arduino is a microcontroller, while RaspberryPi is a microcomputer (and the Pi 2 model isn’t slow anymore!).

Raspberry Pi has an Operating System onboard while Arduino hasn’t.

Here is an interesting point of view, on which system to start with if you have children and you want to drive them to making!

Can’t or don’t wanna choose? Try ’em both with RandA!

You may, then, want to turn to the wide selection of books for your starter projects. For the Raspberry Pi, I’d (of course!) start with my own book, Raspberry Pi Hacks. There are quite a few others, though, and books specifically for the latest version, the Raspberry Pi 2, are starting to appear. You shouldn’t have problems building most projects from older books or projects online on the new Pi, though.

For the Arduino, one of my favorites is Arduino and LEGO Projects, because you get to put together two of the most fun toys in the house! I also like anything Simon Monk writes, so to that I might suggest 30 Arduino Projects for the Evil Genius.

While you’re considering what you want to build, think through a few of these questions as well:

Some of these questions you may answer on your way to choosing a project, so keep that last one in mind as you go. They’re both inexpensive boards, but if you want to reuse it in the future, you’ll need to think about multiple projects as you’re planning. And in the end? Maybe you’ll decide you need them both! In fact, with projects like the AlaMode, you can use them together.