A Look into the Open Source Hardware Community

AS you may know, just few weeks ago OSHWA published the results from 2013 Open Hardware Community survey. You can find original datasheets and everything here. Despite raw data is good, I thought it was good to spend some time looking at the data trying to gather more insights, when possible, still keeping in mind that the survey samples a very limited and polarized (OSHWA centric) chunk of the community. But we need to start from something in a way.

Getting involved: How and Why 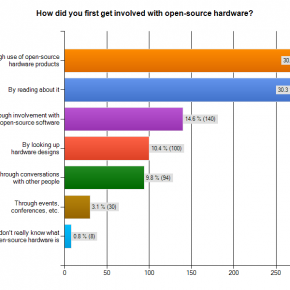 By looking at Q1. How did you first get involved with open-source hardware? We see that around 40% gets into the notion of Open Hardware since accessible designs solve a factual problem for them (indeed they are user of Open Source Hardware or they are looking up hardware designs to use).

The remaining 60% is mostly made of people curious about the notion and concept of open source hardware: this highlights the demand for a more structured conversation on the conceptual topics.

While you go to Q2. Have you ever used open-source hardware products? the percentage of people actually using OSHW raises to an impressive 90%. This means that, irrespectively of getting in touch with the OSHW topics via a more conceptual or just partially related channel (e.g.: open source software)most of the people ends up becoming an active user. This is particularly interesting because highlights how open hardware enables people to take active part into something new for them. Closed source hardware would have been (likely) less inclusive. 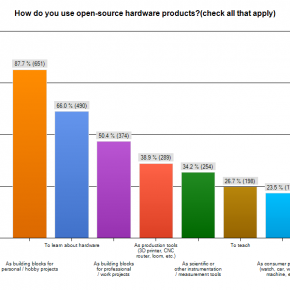 This basically means that most of the Open Source active users start and continue to use OSHW to empower their creativity, irrespectively of professional duties, but also that a relevant chunk of the user base ends up carrying on professional projects. Looking at the overall numbers, almost 30% of respondents are engaged professionally with Open Source Hardware. I suspect this percentage would be higher in software but let’s remember that Hardware is another story and barriers to create a business with hardware are surely higher.

Following questions, Q4 and Q5, actually stress out a very important topic to me: availability of documentation and, in general, availability of knowledge (both of which are related to avoiding lock in into a specific solution). Indeed, in Q4 you can easily spot how two of the most important reasons to prefer open hardware vs closed hardware are the Availability of Design Files and Documentation and Community support. Another key topic is of course the ability to personalize and build upon existing products that basically brings cost of experimentation and upfront investments down, opening the business field to more indie players (in line with what I said previously).

By looking at Q5 then you can see that what prevents users to switch towards open source hardware alternatives is actually the lack of availability of such possibility: with second cause being the lack of high quality open source replacements (overall quality) and third cause being lack of quality in documentation (again emerging as a key issue). 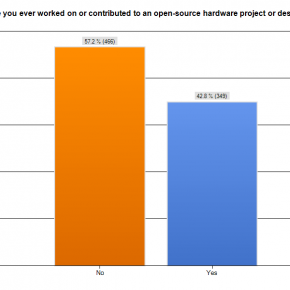 As the document goes on, another interesting insight comes from Q7. Indeed, when prompted about their actual  involvement in working on and contributing actively to an open source hardware design project, the majority of respondents honestly opted for a no. Just considering how engaged is this sample that is made of active members  and users this shows us that contribution to a hardware project is another matter respect to software. It will take time for the community to build major improvements on two key issues: one is the availability of tools to facilitate contributions on actual projects (that may need specialized software to enable collaboration on 3D designs, circuits, etc…), another one is a universal solution to hardware project documentation. This is a challenge that is very clearly felt in the community as appears clearly by the amount of projects that are dealing with this: from iFixit’s oManual to dreamups, from Instructables to  Knowable, from the huge amount of effort that projects like Open Source Ecology or Everywhere Tech are putting together to solve the issue, to the great experience of the Open Source Hardware documentation Jam that we held in New York (and Berlin in parallel) last April (that I had the chance to design and co-host), everything speaks in this direction.

As an add on, if needed, on the controversial and unclear management of documentation files you can check question 13, where users show to clearly prefer unstructured information sharing approach (on their own blog) respect to more structured solutions (on the right). 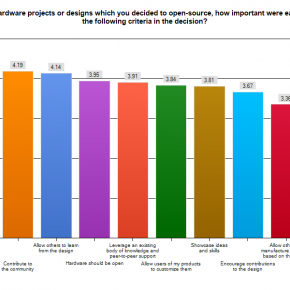 Going forward with the analysis, it’s particularly interesting to assess the motivation of the different people while interacting with open source hardware. I feel particularly cool and interesting two questions: Q6 – Have you ever used others’ open-source hardware designs to…? and Q10 – Why do you work on or contribute to hardware projects and/or designs?

Q6 clearly explains again the empowering attitude of open source hardware:  people mostly use open designs for motivations that are strongly related to learning and understanding electronics (super noble purpose) but, in parallel, very professional needs came up, with people clearly using open source hardware artifacts as part of creative processes targeted to build something new and tailored to their own needs, with actions such as extract parts, adapt,  and customize leading the way.

Coming to question 10, the thing that I love the most is that people is using Open Source hardware designs …for fun! Even if this may seem a negligible fact to someone, I’ll not agree: an important dimension of work in the age of transformation is that work is getting more and more near to topics like personal fulfillment, purpose and value creation and the feeling to do something “for fun” it’s no more just a matter of leisure time. This is proven by the fact that almost half of respondent also work on the designs as part of their daily work, but this didn’t prevent them to feel the fun, in the meanwhile.

Q11, also highlights a truly beautiful fact: the contributive nature of the OSHW community. If you look at the breakdown of Q11 answers you’ll see that the answers, Contribute to the community and Allow others to learn from the designs are those considered the more important, in this way highlighting that the feeling of contributing to a shared pool of knowledge that will be useful to the community in its entirety, is key and important to the user base of open source hardware, and it’s felt as less important respect to more personal motivations such as Showcasing ideas. 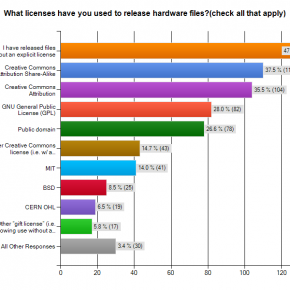 Section 5 of the survey still gives very interesting insights. Again, it appears from a user survey, the  scarce importance that users give to licensing. As you can see the more voted option in the survey was exactly that of basically not using a license while sharing their work. While this can be seen as the choice to be ultra permissive and basically adopting the public domain option, these option was present and available to the respondents and was indeed used by almost one fourth of respondents.

The so relevant chunk of respondents that declare not to have used any license while publishing their work denotes instead a very unconscious approach, that I already had the chance to warn about in a recent post I shared on Open Electronics. Choosing the license properly denotes more maturity in the respondent and indeed we can imagine that is more widely adopted across professional and experienced users.

The large preference that respondents gave to simpler licenses it’s also a warning for us as OSHWA: we need to advocate for a pick-your-licensing process that is smoother, clearer and easier.  Creative Commons achieved to be simple but it’s for sure not the best choice for clarity, having been invented for soft assets. The fact that Arduino – by far the most successful OSHW project in history – is releasing files in such a way is probably pushing the community in such direction.

All other questions , mostly regarding demographics and income, are pretty interesting but I’ll leave you the possibility to navigate. If there’s one that I feel important and inspiring, by the way, is question 25. Despite the makerspaces and fablabs movement worldwide is in its real infancy – a bit like our OSHW movement – you can see that almost 30% of the respondents are either members or frequenters of this kind of spaces: this must be seen as a witness of the importance that spaces (and communities) have in nurturing active members. Definitely something to reflect on.