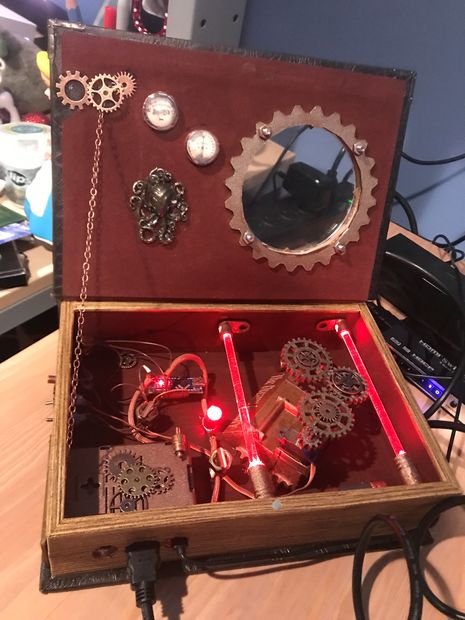 The maker community keeps pumping out unique enclosures for the Raspberry Pi, and this steampunk version where the prerequisite gears move may be one of the best.

The goal of this project was to have the microSD card on the pi stay accessable, so that the image could be easily updated or swapped out. In addition, I wanted to keep the ports externally exposed, so that power, video, audio, USB, and networking were accessible externally from the case.

After cutting out a display window and holes for the ports, Joe Farro added in the Raspberry Pi 3 Model B.  It sits on one corner of the box inside of a decorated transparent case.

The big showpiece of the build is the three 3D printed gears which are visible through the window on the front. These are drive by a fourth gear connected to a servo.
The two “light bars” on either side of the gears are simple plastic tubes filled with NeoPixel LED strips from Adafruit. That lighting system is actually controlled by an Arduino Micro.

A final touch for completion of the authentic is the software itself. The Pi is running RetroPie which is using a steampunk theme available from GitHub.

In his guide the maker also includes a lot of different options and suggestions, so you can build your personal Raspberry Pi case according to your needs.