15 Minutes to Get to Heaven! 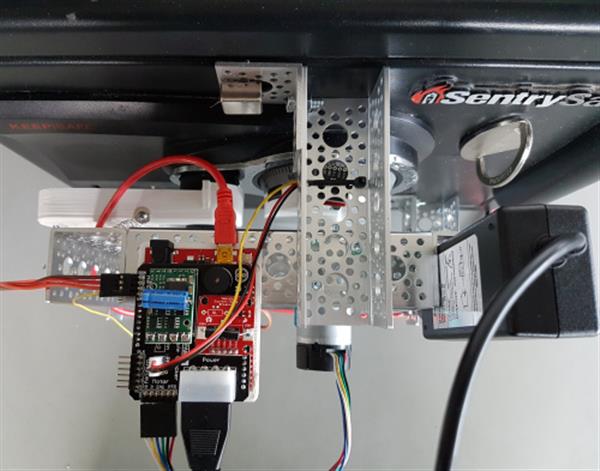 Nathan Seidle, the founder of Colorado-based open source hardware supplier SparkFun, has demonstrated how a 3D printed robot he built and programmed was able to crack a safe in just 15 minutes. The DIY safe-cracking robot only cost about $200 to make. Those include a $20 Arduino board, a $40 motor, an aluminum frame, 3-D printed components including a coupler that attaches to the safe’s dial, some magnets to hold it onto the safe’s face, and sensors that can check if the bot has successfully turned the safe’s handle, and when it passes the “zero” when turning the dial.

Over the course of the four months of development, Seidle adapted and refined the safe-cracking robot, which was built to automatically test every combination of the safe. This approach, called “bruteforcing,” was not totally feasible, however, as it would take the robot about four months to test every possible three-number combination (of which there about a million).

Funnily enough, the final trick that enabled the bot to open the lock in as little as 15 minutes actually came from a design feature that was meant to prevent safecrackers from opening the safe: the combination indents. Upon careful inspection, Seidle noticed that the indents of the third rotor (the final number) all measured the same width except one, which was a hundredth of an inch narrower than the other eleven indents.
This led him to realize that if his robot could measure which indent was narrower than the others on the locked safe, the last number of the combination could be found instantly. This feature reduced the robot’s working time down to a maximum of 73 minutes and, as we’ve been saying, a minimum of just 15 minutes.

Seidle counters that yes, anyone can reproduce his bot—that’s the point of building it from cheap, open-source parts. But by demonstrating his safecracking bot and showing people how to make their own, Seidle says he’s certainly not trying to aid burglars. Instead, he sees his work as mostly harmless DIY fun, and a warning about the limits of the security of a cheap safe.

“I don’t know if anyone is going to replicate my robot, but I imagine someone will take part one and part five and apply them to open a different model,” he says. “And that would make me feel good.”