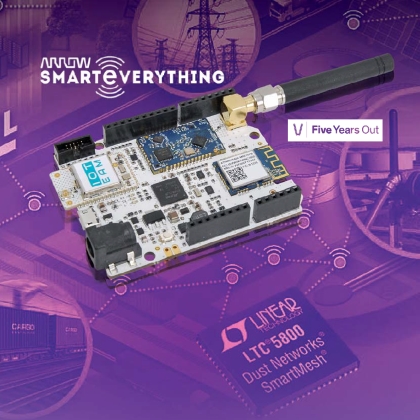 An overview of SmartMesh IP technology equipping the Dragonfly board from the SmartEverything family.

In the previous post, you discovered how simplicity, immediateness and the support of Arduino architecture can be combined with a professional hardware for the creation of IoT applications, that is for acquiring and interchanging data not only from sensors but also through various wireless links, both known and budding, one of which being Dust Networks. This article is dedicated to this technology. Dust Networks is a WPAN Mesh wireless network operating on the traditional 2.4 GHz ISM bandwidth, mainly employed for IoT applications; implementation of WPAN Mesh wireless by Linear Technology (www.linear.com) is called SmartMesh IP and it is used on the Dragonfly board from the SmartEverything range, which we have extensively covered in issue #212. The network was born as an alternative to Long Range solutions and, unlike those, it offers the possibility to make mesh networks, so the networks can be extended in order to adapt it to mix bases and numerous data gather points, all with a very low power consumption.

With data reliability over 99.999% even under the most harsh conditions for radio frequency communications, Dust Networks wireless mesh networks offer to industrial providers of IoT solutions many years of reliability for data related to sensors and remote control, with no need for intervention. 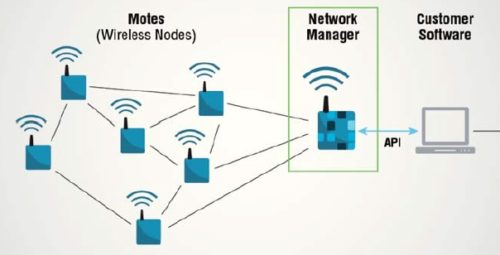 SmartMesh IP is a Mesh-type wireless network; this architecture allows to reach good coverage by bridging the communication over intermediate nodes to physical extend it. The protocol is based on 6LoWPAN (IPv6 over Low power Wireless Personal Area Networks), which offers a reliability similar to cable solutions and very low energy consumption, allowing to safely implement IoT battery-powered sensors in difficult environments.

SmartMesh IP wireless network is time-synchronized and inside it each node can route, generate or receive (terminate) data, providing at the same time an autonomous duration of several years when battery-operated. SmartMesh IP is a highly flexible network with proven reliability and really low-power performances on a platform that can be easily integrated.

SmartMesh IP is composed of a wireless hardware and a software that was explicitly created for meeting the strict requirements of industrial IoT applications.

Linear Technology’s solution has been designed so that developers can manage a wider range of cloud-based indoor, outdoor and local IoT applications. SmartMesh IP offers the functionalities described below.

SmartMesh IP by Linear Technology was born to take up the challenges of:

The SmartMesh IP network is a highly scalable, self-forming wireless mesh network composed of multi-hop wireless nodes called Motes, that can both gather and create data, there is also a network manager monitoring and handling performances and network security and exchanging data with a host application running for instance on a computer.

On average, SmartMesh IP nodes consume up to 50 µA, but some applications require roaming nodes within the wireless network. By entering SmartMesh IP Blink mode, the node can operate with extra low absorption and require less than 3 µA.

In Blink mode (which is software activated) the node is usually in sleep mode (for instance the radio part is sleeping and therefore the node is of the mesh network); another node on the network operating in the same RF range as the Blink Mode node acts as routing infrastructure to release blink packages. This node works in standard mode as a router.

When the blink node must send data to the networks manager device, it wakes up, synchronizes, sends its data package and goes back to sleep. Blink packages are safely and reliably channeled (with encryption) and are ideal for applications with low data transmission frequency. Blink nodes can communicate multiple times a day, even when moving within the networks coverage range. Blink mode is ideal for sending notification packages, containing, for instance, the measurement of a sensor that went over a safety threshold, or the telemetry of a vehicle occasionally entering the coverage range of the mesh network (a warehouse). The new blink functionality allows thousands of SmartMesh IP nodes to send infrequent data in a reliable and safe way within a SmartMesh network low-power mode, consuming a daily average of less than 3 µA.

Motes are wireless nodes of the SmartMesh IP network; they connect sensors and actuators and route related data towards the other motes, all with very low consumption. The name Mote is in perfect harmony with the name Dust, so if a network is the dust, the nodes composing it are the motes.

Each Mote can both send and receive messages (supports bi-directional data) and can have a different data reporting rate and the network manager will automatically coordinate individual communications in pairs to route the traffic in the most efficient way possible.

Each mote can have a different power source and power mode (for instance it can be powered by mains electricity, battery or energy-harvesting). The Network Manager provides network coordination, balances traffic and routes network data to the external world.

Alternatively, a Mote can be controlled by an external host microprocessor through its serial API interface. 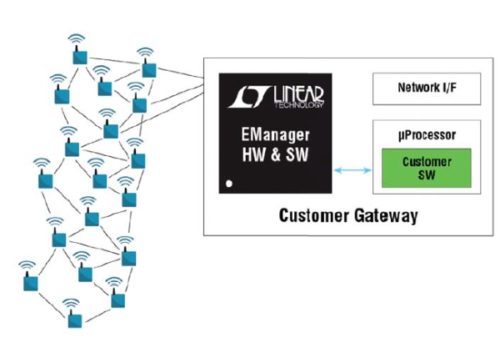 SmartMesh IP Network Manager has the same hardware of the Mote but it mounts a different software to actuate two crucial functions for the mesh network: first, managers act as access points connecting all the motes of the wireless mesh to the host application. Secondly, Network Managers carry out sophisticated algorithms for network management, in order to ensure expected performances.

Below you can find the characteristics of the two variants.

An EManager or Embedded Manager device works as an on-chip manager, where both access point functionalities and network management algorithms are executed on board by the SmartMesh hardware based on IP IEEE 802.15.4e standard. One example is the LTC5800-IPM cheap by Linear Technology.

EManager support connections with up to 100 Motes in a mesh network and therefore are optimal for functioning as low-power gateway.

The device configured as VManager is a special SmartMesh IP device composed of a software network manager and one or more hardware access points, which allows to:

The elements of a SmartMesh IP network communication between with each other using the Time Synchronized Channel Hopping (TSCH) link layer technique, first developed by Dust Networks, and a base block for construction of standard mesh wireless networks based on WirelessHART (IEC62591) and the IEEE 802.15.4e protocol.

In a TSCH network, all the nodes are synchronized in a matter of few microseconds.

Communication within the networks is organized in timeslots (allowing a higher exchanged data packages – power consumption ratio) and make use of coupled “channel hopping” to implement complete path diversity.

The use of TSCH allows SmartMesh devices to stay in sleep mode (ultra low power mode) between two program communication events, typically following a <1% duty-cycle (one period of activity over 100 periods of sleep). The network manager uses TSCH to make sure that:

Time synchronization allows employing the above-mentioned channel-hopping in a receiver-transmitter couple for implementing frequency diversity.
With a SmartMesh IP network:

Besides, networks can be densely populated and made bigger without the risk of RF interferences (auto-interferences) between the various composing elements.

Each network device has a redundant radio path in order to overcome communication interruption due to interferences, physical obstructions or multipath fading phenomena. If transmission of one package fails on the path, the Mote will automatically try again on the next available path and on a different RF channel.

Unlike what happens in other mesh network technologies, no energy consumption or time waste is needed for searching an alternative route, because Full Path is natively supported.

A SmartMesh network constantly keeps ARF profile of the environment surrounding the entire network through automatic site surveys: each node tracks performance stats and periodically sends out these stats to the network manager, within packages called Health Reports. The network manager uses this data in order to proactively optimize network performances and:

Devices composing the SmartMesh IP network are SoC or wireless modules on pre-certified PCBs, complete with ready to use software support for wireless mesh networks and based on standards 6LoWPAN and IEEE 802.15.4e.

Linear Technology’s Dust Networks develops products for wireless sensors networks based on the most reliable and safe standards, as well as being the lowest power consuming devices in the business.

SmartMesh Dust Networks has been tested on the field, by now in over 50,000 active networks in 120 countries worldwide.

With an average consumption lower than 50 µA, SmartMesh IP devices can operate for over 10 years while being powered by a battery, allowing to place the wireless sensor nodes anywhere there is the need to gather data.

The Dragonfly we described in the introduction article on issue #212 is equipped with a Mote Dust Networks specifically made by the SmartEverything team and based on the LTC5800-IPM – SmartMesh IP Wireless 802.15.4e System-on-Chip, which, in a 72-pin, QFN case of just 10 x 10 mm concentrates all required functionalities, that is the 2.4 GHz baseband processor, protocol management stages and everything necessary for the user application.

The Dust module made for the SmartEverything is smaller than those of the competitors (even those by Linear Technology) on the market; besides, is CE and FCC certified, it simplifies the board certification (in our case, the SmartEverything) on which it is mounted to provide SmartMesh IP connectivity.

In line with SoC LTC5800-IPM performances, the Dusty module has very low consumption (under 50 µA), so much so that it can work continually for 10 years powered only by a battery.

Since it’s based on the SoC LTC5800-IPM, it supports 128-bit AES encryption to guarantee the safety of data exchange with other nodes of the mesh network.

The Dusty module by IOTeam allows operation as Mote, EManager or Access-point in a SmartMesh IP network, allowing developers to make use of the SmartEverything Dragonfly board to prototype applications and systems that can work under the three provided profiles.

In this article, we took a look at Dust Networks technology implemented by Linear Technology applied to the boards from the SmartEverything range, particularly to the Dragonfly.

Anyone who wishes to get more detailed information can find more info about SmartMesh IP technology on the web, on the page www.linear.com/smartmesh, where you can also download the documentation.

DUST technology implemented in SmartEverything boards allows both the creation of a WPAN network node and the bridging for instance between wireless links.