I spent ten minutes on the project page but, honestly, I still don’t really understand what’s all about:

The Matter Meter Wave is different than other electronic devices because it engages the user with their surroundings and draws attention to its material support. It does this in several ways; by requiring that the user direct the Matter Meter’s sensor at an object or subject within the surrounding environment, by translating the activity of the metered object or subject to an innovative, stepper motor driven, zoetropic dial (based on Toshio Iwai’s step motion system) , and by giving the user full visibility of the electronic components that drive the device. By drawing attention to the material support of the electronic devices that we place between ourselves and the world, the Matter Meter Wave is designed to question the imaginary immaterial spaces that define humans as separate from everything else and redefines humans as biologically embodied but connected post-humans.

What’s great is that, whatever this object is, it’s Open Source! 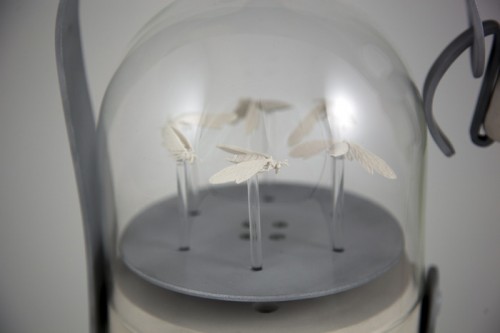