As promised on our previous post about the SciFi your Pi competition, here is one of the project selected for the challenge.

It is an innovative computer interface, similar to that seen in Tron, according to the project owner:

When thinking about science-fiction, things that come to mind are touch/motion controls, things that slide in and out of place and bright lights. This is why I would like to propose to build the desk of the future, inspired by some visual effects of the Tron Legacy movie. 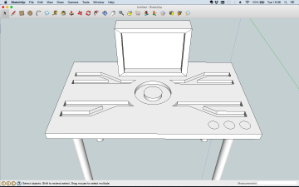 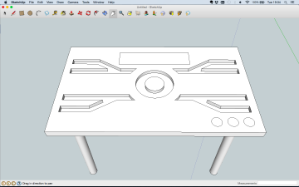 The desk should make optimal use of the surface available. This implies that if for example a desktop computer is not in use, it should disappear in order to free up the space. The idea here is to have a built-in desktop computer, using the Raspberry Pi 2 and some other accessories such as the Cirrus Logic Audio Card, Pi Camera and WiPi dongle, that would slide out of the desk at the touch of a button. The mechanism would be much like the Z-axis of a 3D printer, using threaded rods and stepper motors, controlled by the GertBot add-on board. Pressing the button again would result in the computer to slide back into the desk, freeing up space to be used for something else. Ideally, the desktop computer would power on automatically when sliding out and shutdown properly when sliding back in.

Another feature would be to have lights integrated into the desk. I’d like to experiment with lights built into the surface of the desk, consisting of white LED strips which would be toggled on or off using the PiFace Digital 2’s relays. The lights would be laid out in patterns inspired by the Tron Legacy movie. Their purpose should not only be limited to giving light though. For example, the integrated lights could blink briefly when an email is received or when a certain hashtag is used on Twitter.

It seems really interesting, doesn’t it?