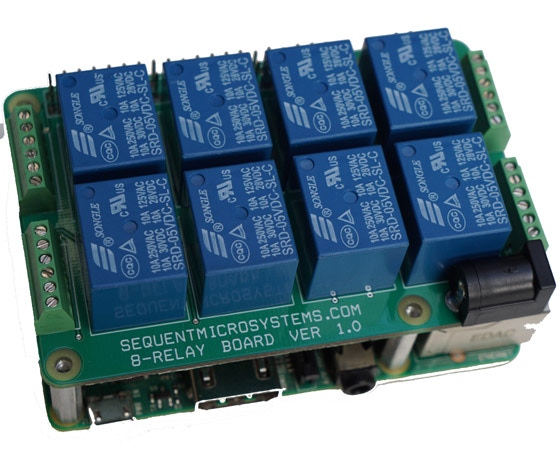 The Raspberry Pi 8-Relay Card is aimed at home automation tasks that require multiple relays. Sequent Microsystems has gone to Kickstarter to launch the Expansion Card, which can be stacked to enable 64 relays per Raspberry Pi for home automation applications such as smart sprinklers. Kickstarter prices, which are available through July 2, are $17 (early bird) or $20 apiece for delivery in September. If you pay $22 you get an early July delivery.

The company provides a tutorial on using boards to build a smart, web-based sprinkler controller for as little as $3 per zone with no programming needed. The device is smart in that it can make watering decisions based on weather forecasts.

The problem with 16-relay boards for the Raspberry Pi is that they use up most of the I/O pins, which prohibits you from using the same Raspberry Pi for other home automation tasks. If you need more than 16 relays and there’s no stacking capability, you are faced with the complexity of using multiple SBCs.

Requirements include a Raspberry Pi 2, 3, or Zero (WH version is preferred).