This amazing boy built an incredible Braille printer using only lego and an open source software:

For those of you who thought baking soda volcanoes made for a pretty sweet science fair project, 12-year-old Shubham Bannerjee’s entry will absolutely blow you away. It’s an actual working braille printer that was built with about $350 worth of Lego that runs on open source software.

Braille printers aren’t exactly cheap. One that can handle standard paper can still cost more than $2,000 today. Shubham’s goal was to create something that was affordable enough that could fit into the average home or classroom budget. Ultimately, he was able to build the BRAIGO with a single Lego Mindstorms EV3 kit and some parts purchased from a local Home Depot.

The BRAIGO isn’t a speed demon. It takes about 5 seconds to output a single character, but that seems like a reasonable sacrifice when you’re talking about a device that costs around 80% less than a retail-boxed braille embosser.

Shubham isn’t the first student to attempt something like this, but he may be the youngest. Back in 2010, a group of Northeastern University students set out to do something similar. Their embosser started out life as an Epson inkjet printer. They replaced the ink cartridges with two embossing wheels, each of which prints half of a braille character. The prototype could output one character per second, and it cost just $200 to build. 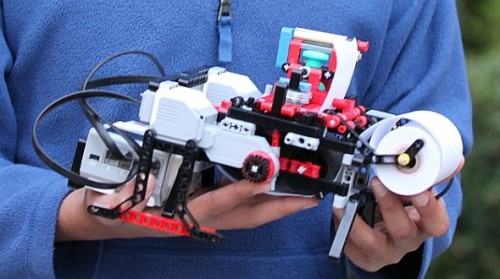