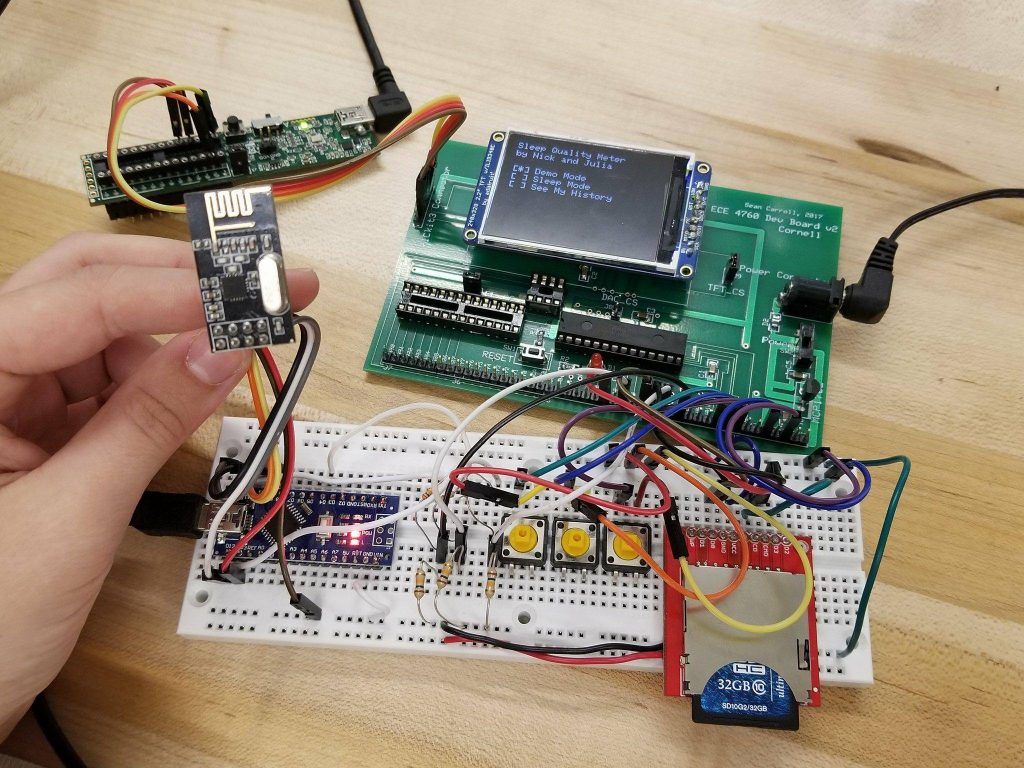 While it can be difficult to get enough sleep, at least you can try to make it as restful as possible when you are in bed. That’s the idea behind this project by Julia Currie and Nicholas Sarkis, who developed an Arduino Nano-based sleep monitor.

The metrics we chose to focus on are: heart rate, breathing rate, and movement. We believe that these three metrics are a good representation of a person’s restfulness during sleep. Through some preliminary research, we discovered that the differences between sleep states are mostly discerned through changes in bodily functions. When we are awake out heartrate, breathing, and brain wave activity is very irregular. When we fall asleep there are two main sleep patterns: REM and non-REM sleep. In non-REM sleep, our heart rate and breathing decreases and becomes quite regular. However, when we are in REM sleep our vitals are almost just as irregular as when we are awake except for movement. During REM we are temporarily paralized, so we shouldn’t see any major movement. We choose to ignore brain wave activity, which is another indicator of sleeping state. Because that would be very costly to measure accurately.

The bulk of the monitoring device takes the form of a glove which measures heart rate using an IR sensor, along with movement via an accelerometer. Breathing is recorded using a conductive band wrapped around the user’s chest, which changes resistance depending on how it is stretched.

The Arduino Nano mounted to the glove collects this information, and transmits it wirelessly using an nRF24L01 chip to a PIC32 microprocessor on a base station. Data is then graphed nicely on a TFT display for further analysis.