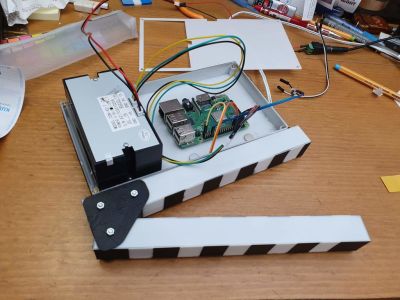 The clapperboard tipically is a device used in video to synchronize audio and video. This creation is an evolved clapperboard that is able to print out posters title, release date and overview of upcoming movies when the clapper is clapped.

The poster is not a big, full color job, but rather a black and white one, roughly the size of a movie ticket. A thermal printer is used to print the poster along with a Raspberry Pi, a switch, and a LED.

The clapperboard itself is made out of 3D-printed parts, which the maker painted mostly black, with the exception of clapping lever that’s masked off in a striped pattern. The moving clapper section is held up with a piece of bent tin, and when forcefully pushed down, it makes a nice “smack” sound, and triggers the electronics via a single interface button.

A nice touch is a metal front, so you can use magnets to keep your posters on the board.

“Movie Tracker is a clapperboard shaped, Raspberry Pi-powered Release Tracker. It uses the TMDb API to print the poster, title, release date and overview of upcoming movies in your region, in a specified time interval(eg. movie releases this week) on thermal paper. There is a LED on the back of the board that lights up when there are new releases. Also, It has two magnets so you can attach the movies you want to watch on the board.”