Vimal Patel, a New Zealander who lives in Denmark currently, began work on a university project which entailed quite simply the making of ‘things’ with 3D filament, one ingredient, leaving basically no footprint or the need for a trash can — or even a recycling bin.

While the project is meant to be simple in its concept, the design and execution obviously took a great deal of thought and depth. Titled monomateriality, the idea was to avoid making something with multiple materials that contain a variety of somewhat toxic and non-recyclable materials. With respect to the environment, the filament was to be the center of whatever they created. It was the one ingredient.

Using his secret LEGO expertise, he engineered quite a complex extruder for shooting the filament out almost like a 3Doodler pen. With the LEGOs working as a mechanical unit, extruding, and connected to a hot glue gun, he was able to make a simplified version of his original idea including robotics. 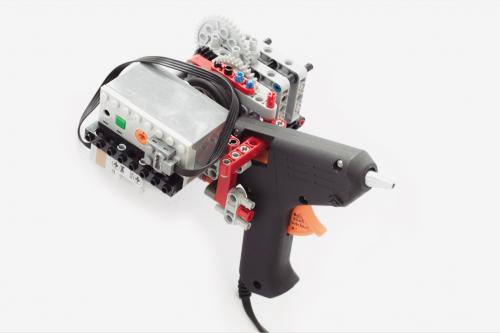 Are you interested in downloading the files to build the LEGO extruder? Try to ask on Monomateriality forum!