Iron Man donates a bionic arm to a 7yr. boy: a real hero! 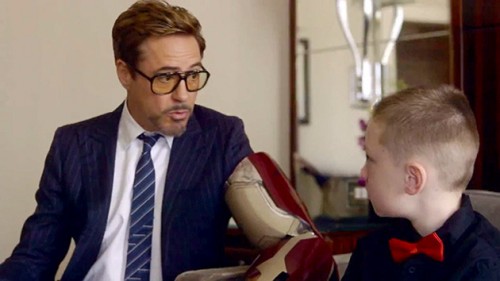 It is a worldwide well-known news but we can’t avoid publishing, the message is too strong and important!

“Tony Stark never imagined his bionic suit would earn the superhero title of “Iron Man” (because technically, the suit is titanium alloy).

Petresky, a sophomore at University of Central Florida, is one of the 40 members on the Limbitless team who helped build an “Iron Man” themed arm for a 7-year-old boy named Alex Pring, who was born with a partially developed limb. After eight months of development and redesign, Alex received his new arm from the Iron Man himself, Robert Downey Jr.”

The arm works via surface electromyography. Electromyography (EMG) reads the electrical signal from the brain and transmits it to the arm, producing a signal that triggers the opening and closing of the hand.

“Alex’s arm is 3-D printed on a Stratasys printer, which takes approximately 40 to 50 hours to manufacture,” Manero said. “Assembly and the electronics take some additional time. Each arm is uniquely tailored for the user, both in fit and in expression.”

The average prosthetic limb costs around $40,000.

Alex’s “Iron Man” arm cost less than $350 in materials, with the research and development time contributed.

The charity initiative has been carried on by Limbitless organization, Microsoft Collective projects and Mr. Robert Downey Jr of course.

Here a video of the struggling delivery: