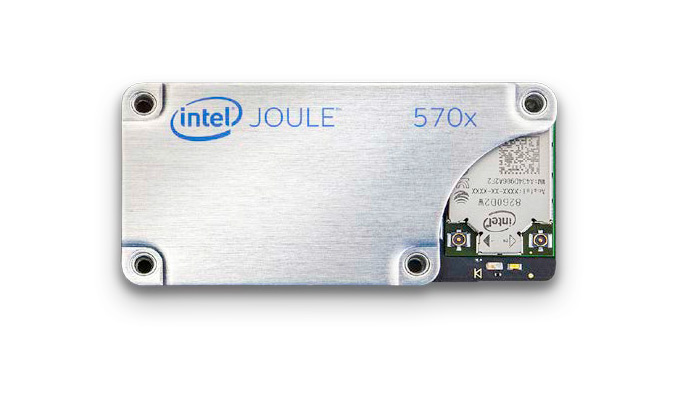 Back in 2013 Intel announced Galileo, the first of what has become a collection of IoT kits/platforms for hardware developers. Galileo and its compatriots Edison and Curie turned out to be solid hits for the company – even with competing kits already on the market – driving a big part of Intel’s overall IoT growth in recent years. The System on Module boards proved popular with tinkers and product developers alike who needed small systems for everything from small prototypes to a commercial off the shelf boards. 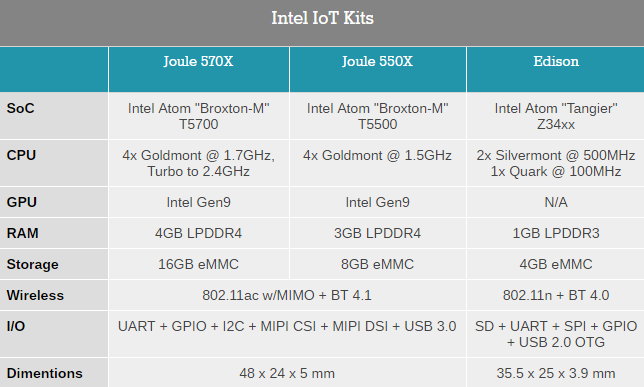 At IDF 2016 Intel launched the new Joule platform, that is supported by Microsoft too and can run Windows 10 IoT.

Joule then extends Intel’s presence in this market by offering a higher performing part in their IoT portfolio. Whereas the previous top-tier Edison board used a combination of Atom Silvermont and Quark CPU cores and paired this up with a respectable amount of RAM, NAND, and I/O options, Joule goes much further. The SoC at the heart of the board is Intel’s Broxton-M, which although was canceled for consumer devices, as we can now see will instead be making a home for itself within Intel’s IoT product family.

Intel is offering two different versions of the Joule board. Both use the same SoC, but they vary in clockspeeds and memory. The more powerful of the two, Joule 570X, uses what Intel is calling a Atom T5700, which is a quad core Goldmont Atom configuration with a base clock of 1.7GHz and can turbo to 2.4GHz. This in turn is paired with 4GB of LPDDR4 memory and a 16GB eMMC NAND module for non-volatile storage. Meanwhile the Joule 550X drops the quad core Atom to 1.5GHz with no turbo, and features 3GB of LPDDR4 memory along with 8GB of NAND.

Both Joule boards also feature the same I/O connectivity. On the wireless side, this is composed of a radio supporting Bluetooth 4.1 and 802.11ac (MIMO is listed supported, so I’m wagering this is a 2 spatial stream solution). And on the wired side, USB 3.0 is supported, along with the vast collection of GPIOs, UARTs, and MIPI’s camera (CSI) and display (DSI) interfaces.