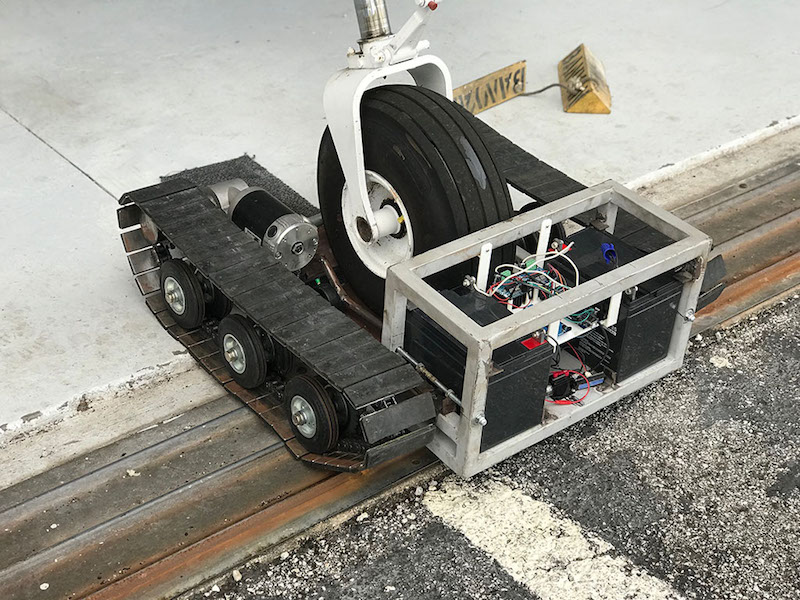 “It’s just used for pulling the plane out of the hangar and putting back in. It’s stored in the hangar. There are some tugs small enough to put in a plane but this one weighs about 200lbs so it’s not really portable.

Once the plane is out of the hangar, you can start the plane up to taxi anywhere around the airport you need. You wouldn’t want to use it on the taxiways because it is slow and it’s easier just drive the plane down them.
I put the strobe on because I thought it would look cool.”

The treaded device looks like a tiny tank, and when it slides under the aircraft’s front wheel it locks in place, allowing a 5,200-pound plane to be pulled around courtesy of the RC system’s wheelchair motors. Onboard, an Arduino Mega serves as the brains of the operation along with an H-bridge for motor control. User interface is handled by DiPilato’s iPhone via Bluetooth.

“For small aircraft, a towbar is sufficient, but for larger aircraft a power assisted tug is necessary for maneuvering the aircraft. Commercially available aircraft tugs are considerably expensive, so many people use small tractors or golf carts to pull their aircraft. For this project I wanted to see if I could build a remote controlled aircraft tug for a reasonable price.

The goal was to design a remotely controlled tug capable of pulling a Cessna 310 with an estimated weight of 5,200 lbs while keep the cost under $1,000.”

The Arduino code  is available on GitHub, as well as the iOS program.