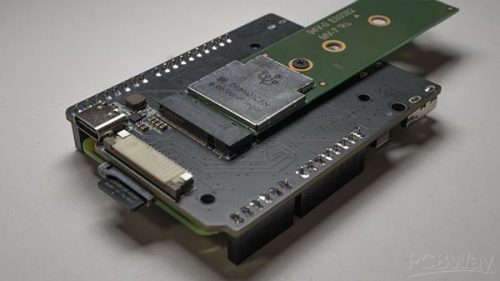 Piunora is a development board complete with IO headers, USB ports, and HDMI output. It has an M.2 connector, some built-in LEDs, a camera connector, and a few other features. It also opens up some new functions, such as the ability to run the Pi as a USB gadget rather than as a host device, which simplifies certain types of development. Compared with the official carrier board of the Raspberry Pi CM4, Piunora has smaller size more similar to Arduino Uno.

You can use Piunora simply by plugging it into your computer and connecting to it via USB gadget mode, either through a virtual Ethernet connection or as USB mass-storage device. Piunora provides a full-size HDMI port with support for up to 4K60 resolution, USB C for data and power, a single USB port, and a connector for Qwiic / Stemma QT components. Six analog inputs are included, provided via an MCP3008 ADC chip. Also, you will find four APA102 RGB LEDs on the board, which can be controlled using Adafruit’s CircuitPython Python library.